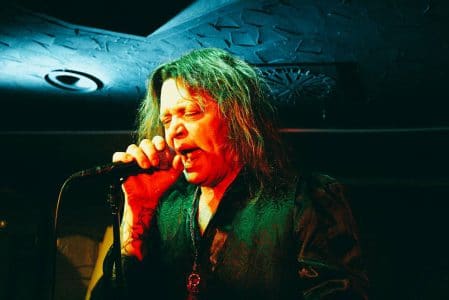 With respect to divulging some information on the new “supergroup”, Reece stated (as transcribed by Sleaze Roxx): “I’ll tell you that it’s… A guy of my age, what I grew up with. Certain members that are part of it are all guys that were my super heroes and I have been asked to sing in it. The group is going to be called The Last Temptation.”

When asked whether this was exclusive information being divulged to The Metal Voice, Reece replied: “Yeah. You’re the first guy. That’s all I can tell you because I basically got shot in the head yesterday when I was like, ‘Well, I’m going to talk to Jimmy Kay at The Metal Voice.” And I got, ‘Shut up!’ And I have written three songs to this music — the lyrics and vocals — that I am going to track with Mario Percudani probably next week.”

Reece is also planning on doing a solo tour where he’ll be playing Accept‘s album Eat The Heat in its entirety. In that regard, Reece advised The Metal Voice that (as transcribed by The Metal Voice with slight edits): “In Sainted Sinners, we do ‘Generation Clash’ (Accept) and it always goes over great and I am able to still sing that stuff, thank God. So out of the blue my good friend Tony and his wife sent me an email they do the festival in Barcelona and he said what you think of doing David Reece sings the whole album Eat The Heat album live. at my festival? I said iIthink that’s a great idea, let’s do it. The next 30 minutes he also booked the north of Spain so I got the 10th and 11 of March next year 2018. I talked to his ex-wife and yesterday and she said ticket sales have been fantastic… What I am going to do is play in all these different countries, so I am using a Spanish band they are called Serious a backing band who grew up in the Accept days and they know every song especially fanatic about Eat The Heat.”

In terms of whether there will be some other Accept songs from the Udo Dirkschneider era in his set, Reece advised: “Yeah I’m gonna do Accept‘s ‘London Leatherboys’, I love playing that song and if I can vocally do it well I would love to do ‘Fast As A Shark’ or ‘Restless And Wild’ and obviously throw in ‘Balls To The Walls.’ There are time restrictions on the set list and I can’t do more than 3 or 4…. I have know Udo for years his son Sven used to open for me, he had a band called Damage. I would play solo shows in Germany and Damage would open for me and everytime I did Udo was around. Last time I spoke to Udo, it was 2011.”