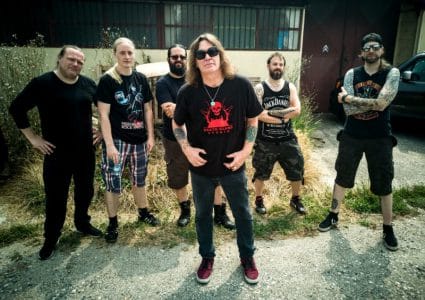 “Resilient Heart” an album rich on full blown melodic heavy metal, will be the follow up album from his latest solo album “Compromise” released in 2013.

Reece says: “I was searching for a record company that would see my vision as a solo artist so I reached out to Mike Tramp and he suggested I speak with Michael H. Andersen at Mighty Music. Michael teamed me up with the Danish producer and song writing team Marco Angioni and Martin Jepsen Andersen, both from the band Meridian. The collaboration we’re working on is exactly where I want to go musically and Michael H. Andersen and Mighty Music have given me a home to release my new record and given me 100% support and belief in this new record! The album will be recorded at Death Island Studio in Denmark with Marco Angioni as producer and is entitled “Resilient Heart”. ”

“Resilient Heart” is the perfect album for all fans of heavy metal. It’s a wide album containing all of the greatest elements within heavy rock and melodic metal. Yet with a modern production.

The first single of the album “Any Time At All” is a wonderful heavy rocker with a touch of Coverdale and Whitesnake inspiration. A song with a powerfull riff, and a strong verse leading up to a bombastic sing-a-long chorus, where a song like”Perfect Apocalypse” stands out with it’s progressive Pretty Maids inspirered elements.

“Resilient Heart” comes with two different tracklist. One for CD/digital and one for the ltd. 500 blood red vinyl edition.

Reece‘s “Any Time At All” video teaser:

Reece – Any Time At All (Teaser)

Teaser for the coming video “Any Time At All” by Reece. Out August 31 through Mighty Music.Taken from the coming album “Resilient Heart” out November 9th thr…