A day after advising Sleaze Roxx that he has written a book about his under the radar music career, on and off Bang Tango and current Flipp and Zen From Mars rhythm guitarist Drew Fortier has provided the details of his autobiography Dark, Depressing, and Hilarious, which will be released on August 24th. 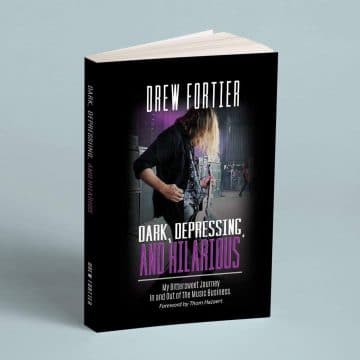 “From cluelessly making a brutally honest and poignant documentary film on the formerly popular rock band Bang Tango, to joining said rock band as a guitarist; Musician/Filmmaker/Actor and now Author Drew Fortier shares tales from his highly irregular and under the radar career in the entertainment industry which also includes: forming the eclectic pseudo all-star band Zen From Mars, starring in the horror film Her Name Was Christa, playing guitar for and eventually making a film about the late Faith No More frontman Chuck Mosley and becoming a traveling record label executive with Thom Hazaert for Megadeth bassist David Ellefson‘s EMP Label Group.

Drew Fortier is best known for his work with Bang Tango, Flipp, Chuck Mosley (Faith No More), Stephen Shareaux (Kik Tracee), and Zen From Mars; which features members of Enuff Z’Nuff, Fear Factory, Flipp, and Kik Tracee. Fortier is also the filmmaker behind the rock documentary “Attack of Life: The Bang Tango Movie” as well as the currently in production “Thanks. And Sorry: The Chuck Mosley Movie“. Fortier will be making his acting debut as a lead in the upcoming horror comedy film Her Name Was Christa.

Drew Fortier and Kik Tracee/Zen From Mars vocalist Stephen Shareaux will be recording a live acoustic album on Friday, August 24th, at Black Circle Brewing Co. in Indianapolis, IN. Physical copies of Dark, Depressing and Hilarious will be available at the show.

Along with Fortier, Shareaux will be appearing at the Rock N Pod Expo the next day, Aug 25, as well.”