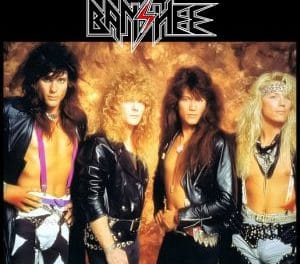 Flood was asked what he thought of guitarist Terry Dunn continuing with the band name Banshee without him. Flood opined: 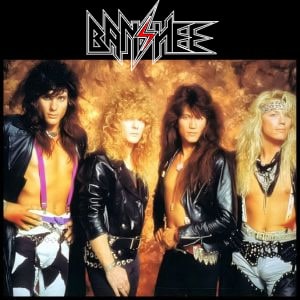 “Terry and I were the primary songwriters, I wrote all every lyric and every melody of every song he ever put out on the first three records. I did have a lot of musical input as well, and the other guys in the band had musical input, not just Terry, but collectively. We split everything equally even though drummers don’t write songs, they still liked to have drum parts, so it was only fair, and I didn’t want to be the guy living in a big house while my drummer was washing  dishes in and around touring.

And to me, that seemed like a problem. I wanted everybody to pull there own weight. We split everything equally so nobody had to trip out about money. Everybody wants to worry about money in the beginning. Everybody in Banshee, even Chuck Hopkins, who was only in Banshee on the first record for a year and a half, and then he decided to quit and get married. He never got to enjoy the hoopla because a month after he left the band was when Metal Blade Records signed us. Bill Westfall stepped in and, and boom, we were in California doing all of our college radio interviews and significant publicity promotional blitz with the release of Crying In the Night.

I put together wonderful groups that played the music well. Of course, me being the singer, I sang the songs. I wrote them I’m asked me a thousand times, ‘Why don’t you use the name Banshee?’ I said I’d never use the name Banshee. People know the Tommy Lee Flood name as they see the name Banshee. I can promise you that every one of those records that says all lyrics and melodies written by Tommy Lee Flood, all music composed and arranged by Banshee. So anybody that ever saw an album cover talk to the band promoted the band. They spoke to me. I’ve had three solo albums. So I felt like I didn’t have to. I always gave people what they wanted to hear, and they wanted to hear Banshee, Terry, for whatever reason, is using the band’s name.”

Flood was asked what happened to the band after Rocklahoma in 2008 when he was still part of the band. The singer replied: “We walked away in 1993, got back together in 1998 and walked away again. With a great sales pitch, I got us together for Rocklahoma. It was short lived. I told Terry we’re parting ways and he said ‘I’ll start my own band and call it Banshee.’ I said, ‘Well if you think you can.’ I said ‘That’s the best thing that you could ever do for me and the best thing that you could ever do for yourself.’ He said ‘Why?’ I said, ‘Well, for the first time, you’ll understand what I did for you all these years. So when you go to put it together, you’ll understand what it takes.’ So keep the name going and I wish Terry well.”

You can read the rest of the interview with Tommy Lee Flood at All That Shreds.

Banshee‘s “Shoot Down The Night” video:

Banshee Shoot Down The Night

Here’s a digitally remastered version of 80’s powerhouse band Banshee with “Shoot Down The Night” Thanks to Tommy Lee Flood!