Former Danger Danger guitarist Andy Timmons was recently interviewed by Andrew Catania for All That Shreds.

Timmons was asked about his future plans for 2019 to which he replied: “We have a tour booked for Asia in April and hopefully be back in the states by summer. I’m working on a new Andy Timmons Band album here and there with my bass player Mike Daane. I’m not working on a deadline. When we have something special enough to put, we will. I also started working on another project where I’ll be doing the vocals and instruments again as time permits.” 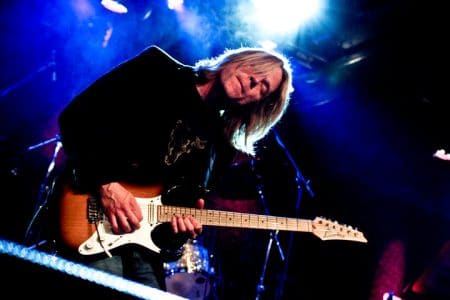 In terms of how he has evolved as a musician, Timmons opined (with slight edits): “It’s fuller circle than you might think because if you look back on my Ear X-Tacy record, which came out in 94, there was a lot of that was recorded and started before I joined Danger Danger.

My first instrumental track, which is on that record was recorded in 1988 called It’s Getting Better. It’s already in that genre of what [Steve] Vai, [Joe] Satriani and a little Yngwie influence what those guys were doing at the peak of the shred guitar movement. It was those recordings that got me the Danger Danger gig. I just wasn’t confident in what I was doing in that field. This just out of my usual humble humility. I thought I’ll never be that level of player and here’s this chance to join this band.

To be honest. And some people know the story. When I was offered the Danger Danger gig. I was also offered the Tower of Power gig, which is, for those that don’t know, a very influential kind of funk rock group from Oakland, California. My capabilities could have gone either way. I’d already studied quite a bit of Jazz if Miles Davis called, I could’ve taken that gig. There was definitely a different animal in the hairband genre than the typical guitar player that might’ve been playing in that field. That’s not to downplay any player that was doing it. I came to it with a completely different depth of knowledge of guitar music already at that point. So, what happened after that point is that I just continued.

Some of my stuff might have been in that genre or something that was going back to more of the jazz thing. I equally enjoyed all of it.  I listened back to the stuff that I did in Danger Danger and I’m really proud of it because I think there are some really nice melodic rock and rock and roll and guitar playing.

It’s an evolution. It’s a natural growth that if you’re really dedicated to your instrument, and I’ve always been, I’ve always been in this for the strictly for the music, I love the art of music, guitar playing and I just want to keep getting better.”

You can read the rest of the interview with Andy Timmons at All That Shreds.

A tribute to two of my heroes, David Bowie and Mick Ronson (end solo). A nod at the fade-out to Tom Scholz (another great influence!).Instruments played:1963…