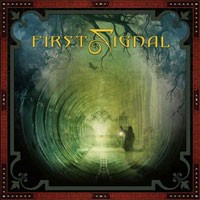 The concept behind this recording is to bring back the classic Harem Scarem sound which after the band decision to split is very much missed by many fans. Records such as “Mood Swings” and “Weight of the World” are regarded as true masterpiece albums and they were the inspiration behind the First Signal songs which of course are also open to some new twists and interpretations.” The record is very reminiscent of the songs I grew up listening to and fit my vocal style”, says Harry “It definitely reminds me of the songs we were writing very early on in Harem Scarem. I haven’t been involved with anything even close to this style musically since Harem Scarem, so it was a lot of fun for me and if the fans really like it I’m sure there’ll be a future First Signal!”

Harem Scarem have displayed throughout their 12 official studio albums a vast array of styles, from AOR, to Arena Hard Rock and Power Pop in the “Rubber” years. Still the fans have always asked the band to go back to a guitar riffs oriented sound which melted the influences from the Melodic Metal of the 80’s with more contemporary sounds.

A great team of songwriters, including brothers Tom and James Martin (Khymera, Sunstorm, House of Lords), Erik Martensson (W.E.T., Eclipse), Ronny Milianowicz (Saint Deamon), Robert Sall (W.E.T., Work of Art) and Mark Baker (Signal, House of Lords) among others, had the task to recreate that magic sound, which is now back in all its glory thanks to a monster vocal performance from Harry and a crisp production and arrangement work from Dennis Ward.

Other musicians on the album include Chris Schmidt on drums, Michael Klein on guitars and Eric Ragno on keyboards and the necessary background vocals contribution from the other ex Harem Scarem member Darren Smith.

The songs “This City” and “Yesterday Rain” can exclusively be listened in full in streaming on the Frontiers Web radio from June 21st. Tune in at: www.frontiers.it/webradio