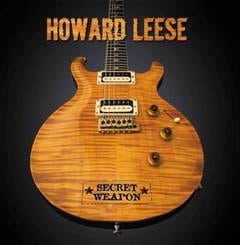 Best known as guitar player for Heart which he joined in 1975 and with whom he stayed for 22 years, Leese co-produced some of their 13 albums. Heart had 20 top 40 singles, 3 International n. 1 singles, a n. 1 album (“Heart”) in 85′, has received 4 Grammy nominations and has sold 40 million records worldwide.

Following his decision to leave the band he put together a group in Seattle called “The Brigade”, a band playing some old Free classics and where he could express at best the various influences that shaped up his guitar playing: from Dick Dale (the first live experience that he had) and Mike Bloomfield to Keith Richards, Peter Green from Fleetwood Mac, Jeff Beck, Hendrix, Eric Clapton and of course Paul Kossoff of Free.

In 1997 the legendary Paul Rodgers (Free, Bad Co, The Firm with Jimmy Page, Queen) had moved from England to Vancouver and was looking for a U.S. back-up band. Intrigued by how well Leese could play Kossoff’s particular style and licks, he asked him to join his band.

In 1998 Howard Leese joined The Paul Rodgers Band and more recently became touring member in the reformed Bad Company line-up. “For the last 10 years, every summer I play shows with Paul Rodgers” says Howard. “But 3 years ago, Paul was doing a QUEEN tour, and I had the summer off. So I decided to record a solo CD. I had just put a studio in my home, and knew it was a perfect time to express myself as an artist”.

Howard Leese has often been called “Heart’s secret weapon”. His debut solo record, aptly titled “Secret Weapon” is an effort that’s sure to thrust him into the spotlight he so patiently has watched dance around in front of him for decades. “”Secret Weapon ” has a wide range of styles. It can go from heavy power trio rock to full symphony orchestra to tender acoustic passages, and that’s just in one song!” says Howard, who offered up such Rock giants like Joe Lynn Turner (former Rainbow and Deep Purple singer), Paul Rodgers, Keith Emerson or Jimi Jamison (ex Survivor), to have their spotlight turn on his record.

Howard Leese takes great pride in having his work heard from the dark depths that linger behind the spotlight. The only difference now is that the secret is out, so he might simply be a weapon – one hell of a weapon! “My fans mean so much to me, they have changed my life” concludes Leese, “Secret Weapon” was a labour of love for all of you, and I hope that you all will love it”.