Former Judas Priest drummer Les Binks was recently interviewed by Mick Michaels for The Cosmick View. Binks was asked whether he accepts that his band Les Binks’ Priesthood be described as tribute band or is it something more than that considering that the group plays a host of classic Judas Priest songs that he originally played on. 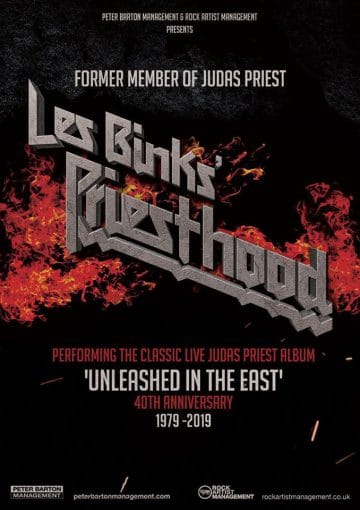 The drummer replied (with slight edits): “The Les Binks’ Priesthood band was originally put together for a one off performance at ‘Legends Of Rock’ festival. The concept was to perform the material that I’m associated with during my time in Judas Priest. This included the songs I recorded, co-wrote and performed live on tour. Tribute bands don’t have any original members who created the records or played a part in writing them so I guess that rules out the tribute label. We don’t play material beyond my tenure. However, at the request of the promoter of Legends of Rock, we threw in three extra songs from beyond my period to keep him happy but haven’t played them since and don’t intend to.”

“K.K. Downing and I had recorded a new version of a song I co-wrote with Rob Halford “Beyond The Realms of Death” back in 2017. We had Tim ‘Ripper’ Owens on vocal, second guitarist was Paul Crook (Anthrax, Meatloaf) and Joey Vera on bass (Armored Saint). I was in Ireland when I got a call from K.K. asking me to do a one off show with him, Ripper and David Ellefson from Megadeth at K.K.’s Steel Mill in Wolverhampton. The second guitarist was A.J. Mills from Hostile. This would be the first time I walked onto a stage with K.K. since I left Priest. We had limited time for rehearsal as David and Ripper were only arriving in the U.K. a day or two before the gig but all went well and we had a blast. The audience was fantastic and excited to see K.K. back on stage doing what he does best. A great set list which included material that Priest had never performed live before like “Before The Dawn” and two songs from the Ripper era. It’s a great night to remember and a lot of fun for all.”

You can read the rest of the interview with Les Binks at The Cosmick View‘s website.