It didn’t take that long for former Kickin Valentina lead vocalist Joe Edwardz to find a new home as the singer has a new band called Motorage. The group is rounded out by guitarist Sean Quidgeon, bassist Amy Epperley and Ivan Momcha. 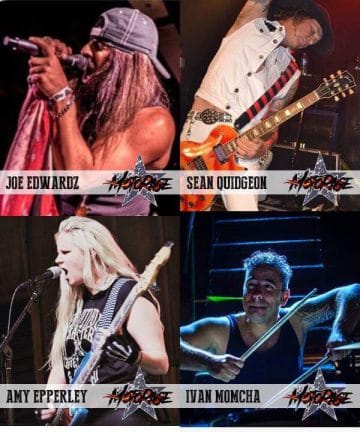 Earlier today, it was announced that Motorage will be playing at the 10th anniversary edition of the M-Pre Party at Sonoma’s Bar & Grill in Columbia, Maryland, USA on May 2, 2019, which precedes the M3 Rock Festival taking place from May 3 to 5, 2019. M-Pre Party organizer Dave Dillman posted the following message on Facebook earlier today:

“D-Toxin Productions and The 2019 “M-Pre Party” would like to welcome MotoRage. With this being the 10 anniversary of this event it was important to make this years show extra special as a “thank you” for the support over the last 10 years. This is one band that will be making a lot of noise in the near future. Keep an eye out for their first single which will be released soon.”

Kickin Valentina parted ways with Edwardz back in July 2018 when the singer advised with very short notice that he would be unable to make a series of tour dates in Germany later that month. Kickin Valentina were forced to pull out from those shows including an appearance at the prestigious Bang Your Head Festival.

Sleaze Roxx interviewed Edwardz back in mid-July 2018 and asked him whether he would be continuing in music if things couldn’t be worked out with Kickin Valentina. Edwardz advised: “I’m really not sure yet. I don’t know. I’ve had a bunch of offers. People that want to do things that I haven’t entertained anything serious yet. I’ve been asked do some songs on some other CDs for some band. And I think that I am interested in doing that. I am also interested in continuing to write music. It’s one of my most favorite things that I love, that I like to do, and more than the other. And second would be singing and third would be the performing.”