Since leaving L.A. Guns in or about September 2014, bassist Scott Griffin has been busy playing bass for Sin City Sinners but also being the lead vocalist for spin off Sin City Rejects who play more punk oriented material. Griffin has also recently started working in the real estate industry. Las Vegas’ proclaimed “Most Hated Band” Sin City Rejects are in the midst of recording their debut album Death Of A Nation and have started a Pledge Music campaign to raise funds in that regard. 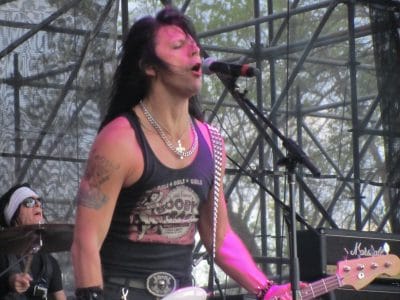 “My band, the Sin City Rejects, has started recording our debut album, Death of a Nation. It features me on vocals, Jason Green on bass, Johnny Roxx and Rachel May on guitar, and special guests throughout, including Richie Ramone from the world famous Ramones!

If you think you might want to buy it, you can get a lot of cool stuff along with it by pre-ordering the album right now at the link below.

Yes, you can also just wait till it’s released, but you won’t get all the cool stuff with it, and to paraphrase Wooderson in Dazed & Confused “It’d be a lot cooler if you did,,,,” ?

So the link to pre-order, and information on all the different packages available, is right here:

Thank you to all who have already pre-ordered. We’re working hard, and we promise we won’t disappoint!”

Sin City Rejects playing The Beastie Boys‘ “Fight For Your Right (To Party)” at the Golden Tiki Bar in Las Vegas, Nevada, USA on June 27, 2017: