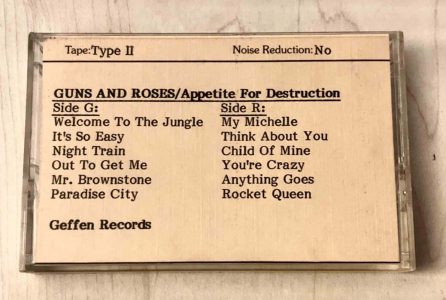 Rock / metal journalist and former M.E.A.T. Magazine publisher Drew Masters shared a fun story via his Facebook account of when he received an advance copy of Guns N’ Roses‘ debut full-length album Appetite For Destruction and when he first met the band members.

“*EXTREMELY RARE* advance cassette of Guns N Roses 1987 debut album “Appetite For Destruction”… notice how their name is misspelt “GUNS AND ROSES” on the insert, and “GUNS & ROSES” on the cassette… also misspelt are “Out To Get Me” (“To” should be “Ta”) and “Sweet” is missing on “Child Of Mine” 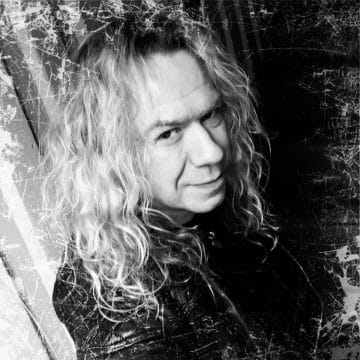 I acquired this tape in the spring of 1987, via Music Express magazine, as their metal columnist… at the time I was informed not to lose or damage it because I was apparently the only person in Canada with it… I can only presume it came to ME mag from GNR’s Canadian record label, but it also could have come directly from the band’s USA reps

As posted on Worthpoint by a GNR insider(*) only a handful of these tapes — picked up from the manufacturer by Slash himself — were produced, expressly for the band themselves (and their small group of insiders) in order to hear the final mix… it’s generally considered that few still exist… undoubtedly, it’s the rarest cassette tape ever made of GNR’s debut album (*see attached screen shot from Worthpoint)

When GNR played Kitchener — opening for The Cult on August 18, 1987 — the album had just been released in Canada less than a month earlier to no hype, fanfare, or radio play, so nobody yet knew who they were, let alone any of the songs 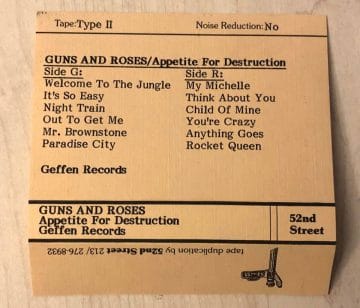 That night’s pro-The Cult crowd loudly booed GNR’s performance, flipping many middle fingers their way… meanwhile, being I was by now familiar with all the songs, I sang along to each of them from my position 3 rows in front of centre stage

As Axl Rose saw me doing so in amazement, he began pointing me out to all the other members of the band during their set, seemingly asking if they knew who I was, to which they all responded verbally or physically “no”

Post-set, I was back at the soundboard hanging out with Helix singer Brian Vollmer and others, when Axl rushed up close to me asking, with an somewhat angry and inquisitive look on his face, “hey man, how the fuck do you know all our songs?” to which I replied, “I’m Drew Masters, metal writer for Music Express magazine… I have your advance cassette… you’re my favourite new band… you guys are going to be fucking huge!” 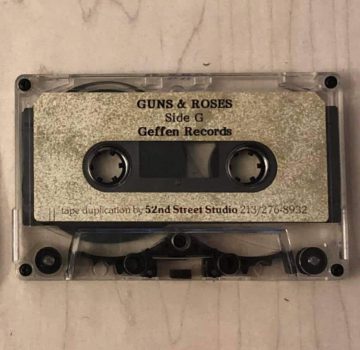 Axl then went all “cool dude!” on me, and invited me back to meet the band… I followed him back to their dressing room, walked in, and was immediately introduced to the rest of the band… the fan in me was in awe at these LA guys and their now-classic street-rocker “Appetite” appearance… plus they had an impressive table full of hard liquor too, which they were mostly drinking straight from the bottles ha!… I hung out with them both there, and then on their tour bus, for the rest of the evening

I’ve unfortunately little specific recall of that hangout, because I got completely hammered on Jack Daniels and weed, LOL!!… though I do vividly recall me and Slash going out together to look at The Cult play, only to have the building’s power go out mid-song ha!

In the years immediately afterwards, Slash always remembered me from that night anytime I met with or interviewed him… once when I interviewed him, he said talking to me was like “talking to a friend”, and added it was cool we met before everything “blew up”

This ultra rare cassette tape is absolutely one of my most prized possessions in my music collection!… and yes, for the right offer I’d part with it… undoubtedly, to a true GNR collector, this tape is a holy grail piece of memorabilia” 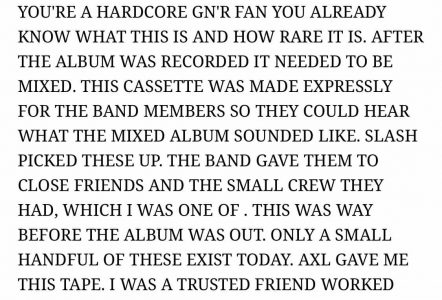