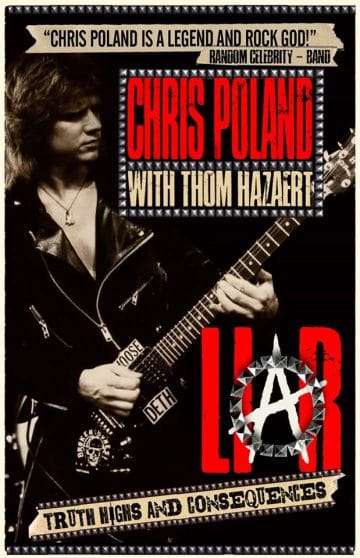 “We have alluded to it in recent weeks, and now it’s time to spill some beans. Yes, I am writing a memoir, with my good friend Thöm Häzäert, who recently wrote More Life With Deth with David Ellefson. The book is titled Liar: Truth, HIghs, and Consequences, and hopefully will be out sometime in 2020, in partnership with Combat Records and Ellefson Books. It will also feature contributions from many others, including David Ellefson, Stu Samuelson, Randy Burns, Mark Tremonti, John 5, and many of the other key friends and family that have been part of this amazing musical journey!!

For now, check out the amazing cover by Melody Myers from Designed By Melody, featuring an iconic photo courtesy of Mr. Neil Zlozower.”

Wikipedia summarizes Poland‘s music career as follows (with slight edits): “Chris Poland (born December 1, 1957) is an American musician, best known for being the former guitarist for American thrash metal band Megadeth from 1984 to 1987 and again for a brief return in 2004. During this time, he recorded the albums Killing Is My Business… And Business Is Good! (1985), Peace Sells… But Who’s Buying? (1986) and The System Has Failed (2004). He was also invited by Megadeth leader, Dave Mustaine, to play on Megadeth‘s Rust In Peace album sessions. However, his parts were not used for the final album. He is currently the guitarist of the instrumental rock / jazz fusion band OHM, and is known for having appeared on several projects and albums from a variety of different genres. Recently, he has been associated with the progressive metal band Redemption, with whom he has recorded two albums and made a live guest appearance.”