The following message was posted by Frontiers Records Group (Official)‘s admin Nick Tieder on that group’s Facebook page back on November 10, 2021: 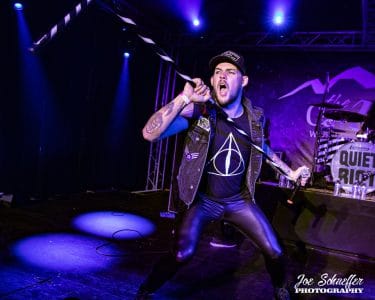 “I’ve been living with, ie. listening to, the releases we have coming in the first half of 2022 and I cannot wait for you guys to hear what’s coming…..see below for some thoughts.

I understand and appreciate that there will be a lot of opinions about the GIANT album because Dann is no longer in the band, but I am supremely confident that the new vocalist will be met with approval. I honestly cannot imagine a better fit to fill Dann‘s shoes. David, Mike, and John are in fantastic form.

Girish And The Chronicles, Manic Sinners, The Big Deal, Kandia, and Rust n’ Rage are new bands for everyone to definitely keep an eye on and lend your ears too. There is no shortage of younger bands making great music.

Speaking of, Electric Mob and Bloody Heels are working on new music too.

The new Treat….just you wait. Mind-blowing.

The new Ronnie Atkins…do you even need to be told that it will be great?

Jeff Scott Soto has arguably come up with his best solo album since Damage Control.

James Durbin has a new band, Cleanbreak, with Mike Flyntz (Riot V) and Perry and Robert from Stryper that will make you bang your head and throw your fists in the air. James is such an amazing vocalist and it’s awesome to hear the metal beast inside him being unleashed like it was with the Durbin album from this year.

And Alessandro Del Vecchio and Edge Of Forever have crafted one of the most uplifting, enjoyable, and positive melodic rock records one could possibly hope for. First single ‘Shift The Paradigm’ is a great hint of what’s in store.

I could go on, but I’ll stop there. Many more surprises and fun stuff beyond these…..”