In a recent interview with The Morning Call, Quiet Riot‘s long-time drummer Frankie Banali continued to criticize seemingly many singers that he hired after DuBrow‘s death in 2007 and restarting the band three years later, and prior to American Idol finalist James Durbin joining the group.

Sleaze Roxx posted an article entitled ‘Frankie Banali states he failed miserably with past karaoke Kevin DuBrow club like singers‘ where Balani was quoted as saying in his interview with The Morning Call (with additions from Sleaze Roxx in square bracket]:

“What he [Durbin] has brought to the live material is his own thumb print. So it does sound like Quiet Riot, but at the same time he brings something of himself. Which I welcome because I tried the karaoke, Kevin-DuBrow-club lead singers and failed miserably doing that. So I decided to step away from that, and either people will like it and accept it on his own merits or they won’t.”

Former Quiet Riot lead vocalist Mark Huff, who was the first official singer retained to join the group after DuBrow‘s passing posted the following comment on Facebook in response to the Sleaze Roxx article and Banali‘s comments:

“Lol,karaoke singers……,Frankie still thinks he is someone with talent.,or thinks he had some. He will never get any attention pretending to be nice. I havent played drums in years and i can still play better than his worthless karaoke hating ass! Hell,i can sing and play drums…if i could remember the lyrics to One piece of shit QR song from one album,which i never purchased or borrowed”

states the following about Huff‘s time with Quiet Riot (with slight edits):

“Despite his previous insistence that Quiet Riot could never return as a live performing entity, Banali announced a new version of Quiet Riot in September 2010 with himself on drums, Chuck Wright on bass, Alex Grossi on guitar, and newcomer Mark Huff (formerly of the Van Halen tribute band 5150) on vocals. The band has sought the blessings of the DuBrow family, and DuBrow‘s mother encouraged Banali to revive the band. In July 2011, this lineup toured Germany as support for Slayer and Accept. 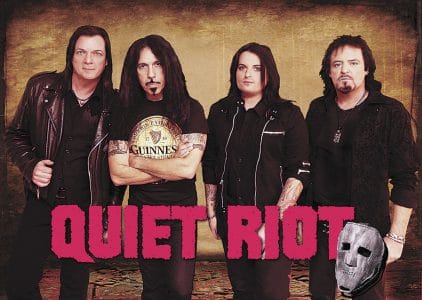 On January 12, 2012, whilst Huff was awaiting brain surgery, Quiet Riot released a statement, announcing that they had parted ways with Huff, and they were replacing him for upcoming dates with Keith St. John (formerly of Montrose). Huff found out about his firing online. In March 2012, Banali hired unknown vocalist Scott Vokoun to fully replace Huff.”

Huff spoke to Sleaze Roxx contributor Ruben Mosqueda in April 2012 about his firing from Quiet Riot stating: “I’ve never had any problems like this in my life… I woke up on January 1st (2012) and I had a seizure. I woke up in the hospital actually. I was told that I had an AVM, which is arteriovenous malformation, in my brain. I was told that it was something that needed to be taken care of right away, but I would make a full recovery. I contacted the guys in Quiet Riot and let them know. In the coming days no one from Quiet Riot came down to see me. I had to find out through the internet that I had been fired from the band.”

Ultimate Classic Rock reported the following comments from Banali surrounding Huff‘s dismissal: “With regards to Mark Huff: My policy has always been not to air out the dirty laundry in public. That policy remains the same even in light of those who chose to make accusations. The fact is that Mr. Huff’s medical condition had nothing to do with the decision that was made, though it is unfortunate that it comes at such a time. His wife assured me that Mark would be home this week, and as legal protocol dictated, a certified letter was sent informing Mark of the decision that was made and why it was made. The content of that letter is a private matter unless Mr. Huff decides to make the reason for his dismissal made public, which I believe would be counterproductive for him. I will not go tit for tat with this issue. If certain persons wish to villainize me, that is their prerogative.”