Former Quiet Riot and Adler’s Appetite lead vocalist Seann Nicols is back with a video for the debut single “Stand Down” from his new band Future Colors. 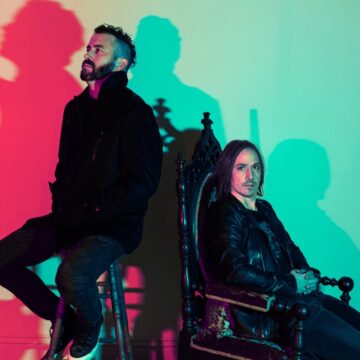 Future Colors is the new heavy-hitting hard rock band, founded by vocalist Seann Nicols, formerly of Westfield Massacre, and former Bellusira bassist Mark Dalbeth. Drawing upon their established styles, Future Colors unites Nicols’ powerful vocals with Dalbeth’s signature heavy bass grooves. These elements are supported by a modern palette of live and electronic drums, low-tuned electric guitars, and cinematic soundscapes. The result is an aggressive and captivating sound that is sure to appeal to hard rock music fans around the world.

Nicols and Dalbeth met in 2020, networking in the Los Angeles music scene. With complementary musical backgrounds and a shared vision for the future, the two teamed up to combine their collective talents. Nicols and Dalbeth are currently in the process of recording the forthcoming Future Colors debut album, set for release in 2021 on Nerve Strike Records.”