Former Quiet Riot and current Westfield Massacre singer Seann Nicols was recently interviewed by Chaotic Riffs Magazine and spoke about what led to his departure from Quiet Riot.

Nicols stated as follows (as transcribed by Blabbermouth): 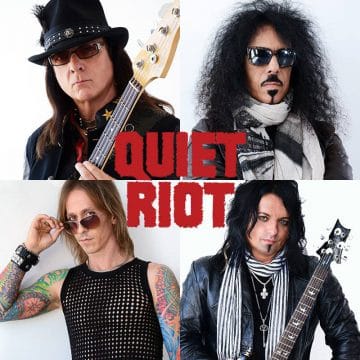 “… And I’ve gotta say that the entire experience of right from the very first rehearsal, dealing with Frankie Banali was an absolute nightmare,… Before we had even stepped one foot in a rehearsal room, he was already going out of his way to give me the cold shoulder and ignore me and treat me like less than a human being. He was cold, he was ruthless, he was just absolutely a nightmare to work with. And I don’t think there’s anybody on this planet that would have tolerated it for as long as I did. I gave everything that I had and all the good faith that I could muster up, all the good will that I could possibly build up in my spirit to deal with him and his terrible personality. But there was just no way that any professional, self-respecting human being could work with that man.”

“Let’s just cut right to the chase, okay? Quiet Riot is a very poorly run, small business organization,… They suffer from poor business ethics. And a company is only as good as its leader. And with Frankie Banali calling the shots, it’s got a top-down effect of negativity. There is no way for that band to overcome the challenges they are facing as long as they have an intemperate, intolerant, unethical leader.”

You can read the rest of the article at Blabbermouth and listen to the interview by Chaotic Riffs Magazine via YouTube.

Sleaze Roxx did an in-depth interview with Nicols back in July 2017 during which the singer advised how he was let got from the band. Nicols stated: “I received a letter by certified mail and an e-mail but I got that after it had already been announced in an interview that came out — I think it was in Germany. So, I actually found out from Frankie after it had already been publicly announced.”

Nicols was asked whether he contacted the band after getting terminated to which he advised: “I just left it and then shortly thereafter, I got the notice for the letter and then I got several e-mails from Frankie wanting to get receipt of, “Hey! Did you get the termination letter?” It was a day later, I responded, “Hey! I got the termination letter. It’s all good.” I just wrote those guys a letter and I said, “Look, I tried my very hardest to make it work out. Sorry it didn’t work out. I wish you guys the best.” I said, “Hopefully, there’s a way that we can spin this thing that will look good for everybody involved.” I just really wanted it to be an amicable split. I never wanted there to be any animosity or any trouble the way it turned out to be. This whole debacle that has unfolded, I really put the blame squarely on Frankie Banali and his overinflated ego. He really — I don’t know why — I can’t imagine being in his position, that veteran status that he holds and trying to take advantage of people at any stage in their career, especially those who were willing to step up to the plate to help him further his vision for Quiet Riot. I am 25 years younger than him. I was getting back into the music business after a long hiatus and I couldn’t understand why he would want to try to hinder my progress in any way other than just bad intentions. He would repeatedly make negative and disparaging comments about me and my education, pitting his 40 years of experience in the music business against my status as a college degree holder in Business Administration. Sorry Frankie, but no amount of experience can make up for a lack of critical thinking skills.”