Rhino Bucket singer and guitarist Georg Dolivo was recently interviewed by Innocent Words and went talked about the sleaze rockers’  new album The Last Real Rock N’ Roll as well as Rhino Bucket‘s history including why they called it quits back in 1996. 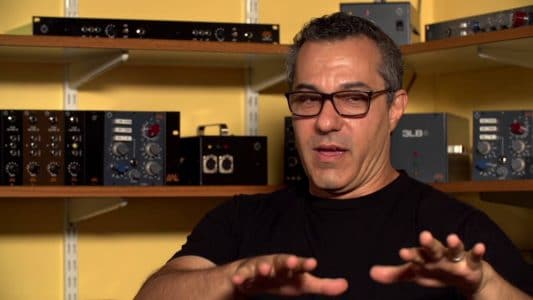 Wikipedia states the following about Rhino Bucket‘s beginnings (with slight edits): “The band was formed in February 1988 by Georg Dolivo (lead vocals, rhythm guitar), Reeve Downes (bass guitar, backing vocals) and Greg Fields (lead guitar, backing vocals). This lineup played the Los Angeles rock scene for a year with contemporaries such as Junkyard and The Four Horsemen. Warner Brothers signed the band in 1989 and they released their self-titled debut album in 1990 with Liam Jason from Warrior on drums.

Their second album, 1992’s Get Used To It, was written and recorded in Memphis with producer Terry Manning. The album contained “Ride With Yourself” which was featured in the hit movie and multi platinum soundtrack Wayne’s World. In 1993, drummer Simon Wright (AC/DC, Dio) joined the band and appeared on the 1994 album Pain. The band continued extensive touring, but by 1996 the band went on what turned out to be an extended hiatus.”

Dolivo stated as follows to Innocent Words about that period of time: “For all intents and purposes, the band broke up… Greg, the original guitarist, was done and wanted to move on with his life. Good choice actually, he just produced Metallica’s latest album. Haha. In hindsight, I probably should of stood my ground and kept the band going without him, but I was recently married and a new father so I had other things on my mind. It didn’t take long though for me to pick up my guitar and start writing songs again.”

Indeed, Greg Fields also known as Greg Fidelman went on to become a producer and engineer, and was in the producer’s chair for Metallica‘s latest studio album Hardwired…To Self-Destruct.

Wikipedia states the following about Fidelman: “Greg Fidelman (born September 4, 1965) is an American music engineer, producer and mix engineer. He has worked with many bands in various genres, many in the heavier rock or thrash metal genres, including Metallica, Slayer, Black Sabbath, Red Hot Chili Peppers, Bush, Audioslave, Marilyn Manson, Slipknot, and System of a Down, but has also worked on albums by U2, Johnny Cash, Neil Diamond and others. Before going into music engineering, he was the former lead guitarist in the band Rhino Bucket, being credited by the name Greg Fields.”

You can read the rest of the interview with Dolivo at Innocent Words.

ONE NIGHT STAND video from RB.wmv