Ex-W.A.S.P. drummer Stet Howland describes Blackie Lawless as so much more than a boss or bandmate 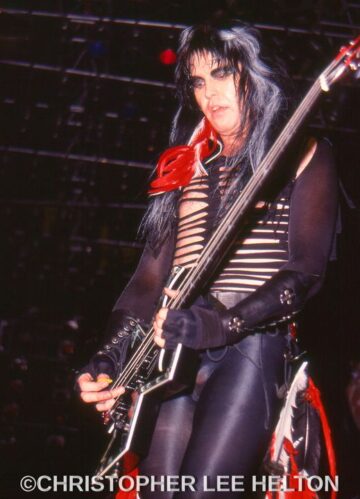 “Thank you for the invite!

When I was in the band, I was very active on the waspnation message board. Then came myspace. lol And now here we are on facebook. I always found the online participants to be kind, and our interactions were always positive. We all shared many stories and it seemed our friends and followers really loved the band and each other. Over the years I came to be friends with many waspnation members. So many in fact that I would often schedule “meet ups” with members before or after a show. Often at a local pub near the show venue. So many great times were shared, along with a lot of love.

I know its a different time now. Its crazy for me to sit back and think about the fact that I was a member of wasp for 16 years. And I have now been out of the band and back to being a fan (like you) for about 16 years. When they say “time flies” I guess they really mean it. lol

I fell in love with the band when I heard the very first release F.L.B. in 1984. (I swear it was late 1983) I’m proud to say that my time with the band was amazing! The brotherhoods formed during that time carry on to this day. I’m still dear friends with every member I worked with during my tenure. Actually, I’m also good friends with every drummer who has ever played in the band except for Tony Richards, who I look forward to meeting one day. He was a huge part of WASP‘s original sound. Frankie (RIP) and I always got along swimmingly, he was a master of his craft. And Aquilles and I met at the last NAMM convention. He is an incredible drummer and one Hell of a great guy. We must have hugged 100 times, my wife and I adore him. I count all of WASP‘s drummers as friends if not brothers. Lots of love and respect shared among us. As it happens Patrick Johansen is an old and dear friend since my early wasp days. I am the one who got him the wasp gig right after I left the band. Hes another crazy good drummer who is also an incredible human.

Jeez. Here I go on and on…. I could talk about every member in detail and likely never run out of good stories. Ha ha ha I have sooooooo many hilarious tales to tell. And honestly, very very little mud to sling. Really, none worth slingining. Blackie was an incredible mentor and friend to me. He instilled business practices that allow me to support my family comfortably to this day. He inspired both my drumming and my singing abilities to new heights. And he prayed for me when I was dying of cancer three years ago. He was in almost daily contact while I was in the hospital receiving chemo. He was the big brother I never had for so long. So much more than just a boss or a bandmate. Our friendship continues to this day.

Ok rockers. I had only meant to say hello, and to thank you for the invite to this group. I guess I got “over-inspired” once I got here. Ha ha ha I’ll leave you all to enjoy this awesome band, its music, and the amazing current members. Though I think I shall waltz down memory lane and crank “Double live Assassins” while I clean my studio.