Former W.A.S.P. guitarist Chris Holmes will be releasing a new EP titled Under The Influence, which is available for pre-order by sending seven Euros + shipping to paypal.me/CHO2018 or csarahholmesmanagement@gmail.com. The guitarist will be having a CD release party at The Workmans Club in Dublin, Ireland on December 2, 2018.

Sleaze Roxx started its review of Holmes‘ C.H.P. album released in 2015 as follows: “Before I give out what will be one negative album review, I want to make a point that Chris Holmes has played guitar on some of my favorite albums of all-time. W.A.S.P.‘s self-titled debut album, The Last Command and The Headless Children are simply absolutely brilliant albums that I still really enjoy more than 25 to 30 years later. W.A.S.P.‘s Inside The Electric Circus is in my eyes a very underrated album and contains some amazing tracks. Holmes was a part of all four of those albums and for that reason alone, I will always be interested to hear whatever he comes up hoping that the “magic” will come back one more time. I have to think that it’s on the strength of those albums and some of the other subsequent W.A.S.P. albums that Holmes was a part of that the giant of a man has a record label behind him and still a lot of interest despite the mostly mediocre songs that he has come up with on his own.”

Sleaze Roxx concluded in its review: “Even though Holmes has delivered for the most part, one awful and at times unlistenable (mostly due to his “vocals”) album, or “the best of” from two presumably and likely awful albums, I would still go see him play live hoping to hear a few W.A.S.P. classics and because after all, it’s Chris “Fucking” Holmes. I suppose that I am still hoping that the “magic” will somehow reappear. That being said, with W.A.S,P.‘s frontman Blackie Lawless still coming up with some good to great albums, it strongly appears that Lawless and not Holmes was the key architect behind all those great W.A.S.P.albums. Not all is lost for Holmes as simply abstaining from handling the lead vocals might result in a pretty good album from the iconic guitarist.” 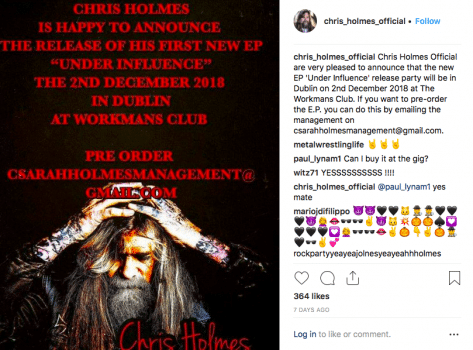