Former Warrant and current Tuff guitarist Billy Morris was recently interviewed by All Music/All Bands and spoke about his group Sunset Strip‘s upcoming debut album, which will be released via High Volume Music. 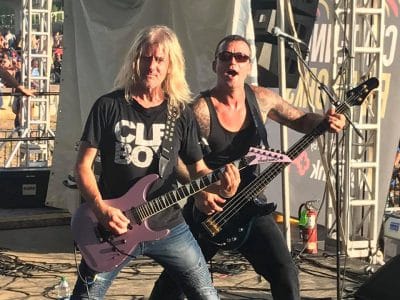 In terms of how Sunset Strip got started, Morris stated (with slight edits): “Well I’ll tell you what I love is playing music and make my living at it. So I out this band together, the guy that came up with the name was Stevie Rachelle for Tuff. He said “man that would be a great cover name, Sunset Strip.” Which is right because we play all the music from the Sunset Strip. A lot of Warrant, Poison, Mötley Crüe, Van Halen, Ratt, Dokken as well as the other stuff like Bon Jovi. Anything good from the 80’s. It’s not all Hair Rock, but it’s Rick Springfield, Bryan Adams, Loverboy, Eddie Money, just to get on stage and have a great time. So I’m inspired to do this project and a way to pay my bills and being able to play live music. That’s what’s that’s all about. We play every Friday and Saturday and we do pretty good.”

With regard to whether he already knew his Sunset Strip band members or not, Morris advised (with slight edits): “That’s a good question because the bassist in Sunset Strip, his name is Craig Martini. He currently playing with Phil Collen from Def Leppard on the G3 tour coming up and he just did the G5 tour with Joe Satriani, Phil Collen, Paul Gilbert, and Warren DeMartini in L.A. We had been friends for like 25 years so I’ve toured all I over, played with Paul Gilbert, played with Warrant. He’s played with Paul Gilbert, Joe Satriani, Warren DeMartini, and with Phil Collen. He’s toured all over. He’s recorded with The Allan Parsons Project. He’s a very accomplished musician. We both really don’t like to travel as much as we use to so we put it together in Cleveland. Our drummer Ray Brown, who is an amazing vocalist and drummer, plus a great entertainer. We’ve all know each other for about 25 years so we decided to put this band together and we all get along really well. Our lead guitarist Rob Samay. I’ve known for quite some time, not just as long as the rest. He’s a rocker. He’s got the mega hair, the best hair in town. He’s the ultimate professional musician. He’s the perfect member for Sunset Strip.”

Morris was asked whether there are any plans to record original material to which he replied: “Well the recordings are done. The original music is already recorded, just need to tweak some mixes and finish some guitar solos. I’m never finished, always writing songs or adding to it, but I guess I have to finish this. Our record label High Volume Music has been waiting patiently and we are definitely near finishing this and mixing it, but at the same time it’s going to be well worth the wait. There are some great songs on this. We have a hit single coming out. I call it a hit single, it’s not a hit yet, but I believe it could be an anthem. It’s called “Party Like The Weekend Never Ends.” I think everyone’s going to be happy when they get this disc, CD, download, or whatever you call it these days now.. It’s going to kick ass and we’re really excited to release this.”

You can read the rest of the interview with Morris at All Music/All Bands.