Ex-White Lion drummer Troy Patrick Farrell starting new radio show ‘This, That And The Other’ 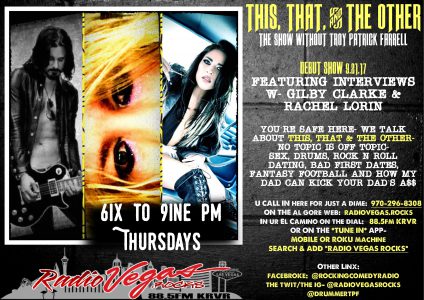 Former White Lion and current Angels In Vein drummer Troy Patrick Farrell will be unleashing a new radio show entitled This, That And The Other, which will be based out of Las Vegas, Nevada, USA.

“Former White Lion drummer Troy Patrick Farrell will embark on a new radio excursion on “Radio Vegas Rocks” which can be streamed at www.RadioVegas.Rocks, tuned in on the FM Dial in Las Vegas at 88.5 and on the TuneIn APP (by adding Radio Vegas Rocks).

The show is called “This, That and The Other”, which will hit rock topics, gossip, sex, sports and anything “the listener wants to discuss”. The debut show is September 21st 6-9pm (PST) and will feature and exclusive interview with former Guns N Roses guitarist Gilby Clarke and up and comer Rachel Lorin.

Other segments will include inside stories and rare musical tracks.”