Former White Lion frontman Mike Tramp has announced the first confirmed US tour dates for his Tramp Nomad Tour which will run from August 11, 2016 to October 5, 2016. 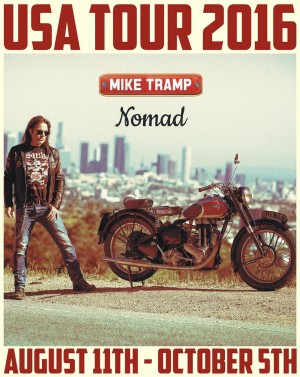 Sleaze Roxx caught Tramp‘s tour stop in Toronto, Canada back in late May 2015 and stated the following in its concert review: “It felt weird hearing all of the White Lion tracks being played acoustically. I think that some worked better than others. Two of White Lion‘s most popular tracks, “Wait” and “Radar Love”, were fun to hear acoustically but paled in comparison to the original White Lion versions of those songs. Just before the guitar solo portion of “Wait” and while still playing that song, Tramp even warned the audience that he could not replicate the solo from White Lion‘s guitarist Vito Bratta so we just had to imagine it or something like that! My favorite tracks played by Tramp were therefore not the ones that I thought they would be. Out of the White Lion tracks, I really enjoyed “Little Fighter”, “Cry Freedom” and “Lady Of the Valley”. I also really enjoyed two tracks that I had never heard before which were the aptly named “Hymn For Ronnie” — Tramp‘s tribute song to the late Ronnie James Dio — and the Freak Of Nature track “What Am I”.”

Sleaze Roxx stated the following in its review of Tramp‘s new album Nomad: “What sets Nomad apart is simply Tramp‘s voice. If you like Tramp‘s voice and acoustic gigs, you will most likely like Nomad. In fact, I think that most of the songs on Nomad would fit well alongside the acoustic or slowed down versions of the White Lion classics that Tramp has been playing live and that is really a compliment and a testament to the quality of the songs on Nomad that they match up in that regard.”