Former Yngwie Malmsteen and Loudness lead vocalist Michael Vescera was recently interviewed by Andrew Catania of All That Shreds on the occasion of his new album Beyond The Fight with his band Vescera. 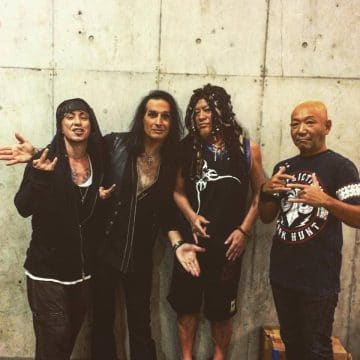 All That Shreds pointed out that Vescera has worked with some of the best guitar players out there and the singer was asked if there was one he enjoyed working with the most. Vescera replied: “I’ve been very fortunate to work with so many great players, and they’re all killer in their way. Difficult to pick one, but I would have to say Akira (Loudness) impressed me the most, just a fantastic player!!”

In terms of commenting on the remarks that Malmsteen recently said about his former singers, Vescera replied (with slight additions): “Funny stuff!!!! I know Jeff [Scott Soto], Joe [Lynn Turner], Tim [“Ripper” Owens] and even Mats Levin quite well, all great guys and awesome vocalists!! I’ve moved on from the whole Yngwie thing, and just wish everyone the best!!”

You can read the rest of the interview with Vescera at All That Shreds.

Loudness‘ “In The Mirror” video (with Michael Vescera on lead vocals):

Yngwie J. Malmsteen‘s “The Only One” video (with Michael Vescera on lead vocals):