Two of the three band members in the new Exciter line-up, namely Dekay and bassist Allan Johnson, were recently interviewed by Jimmy Kay of Canada’s The Metal Voice to talk about the changes. 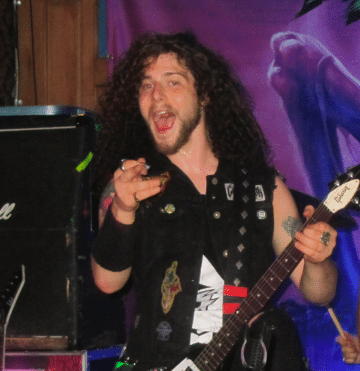 With respect to Ricci‘s sudden departure, Johnson advised (as transcribed by The Metal Voice with slight edits): “That is still somewhat of a mystery we haven’t seen or actually spoke with John Ricci since it happened. We got back from our Singapore gig and we started some email chats back and forth and John Ricci just said that he is getting fed up and he wants out. Dan [Beehler] and I were quite surprised about this. First thing I said to John was we got tentative shows next year. So John said you and Dan can go ahead  and do the shows without me and that was pretty much it. John did not give a solid reason why, I don’t know what he meant by fed up? John said yeah I am definitely out.” Johnson continued: “It’s funny cause the first thing I said to Dan about this was, guess what it’s 1985 all over again. It’s like deja-vous. Back in 1985 we came back from a US tour and John said I am out I don’t want to do it anymore and me and Dan were like we have a German tour in a month what do you want to do? John said do it without me. So it was total Deja-vous.”

In regard to how Dekay got the gig, the new Exciter band member stated: “I am originally from Ottawa so when I started playing in metal bands when I was 14, 15 ,16 I started discovering the legends of my city, names like Exciter, Annihilator were household names everyone knew who these people were. Threw playing in bands I met Dan Beehler. I became  friendly with him and his family and I also met John Ricci. My best friend played in Dan‘s band Beehler. Ironically enough last February, I was on the 70,000 tons Metal Cruise with Banger TV and I did an interview with the original lineup of Exciter and here we are less than a year later, I am in John Ricci‘s boots, this is insane, the whole thing is a lot to process. I went from listening to the records religiously to learning how to play their records, this has been the most exciting thing musically for me in a very long time.”

Johnson added: “When I announced John Ricci left, I started getting messages on Facebook from guitar players all across Canada and the US and one particular message came from Dekay and all it was is, dude I want to be in Exciter, and I said are you serious? And he said 100 million thousand billion percent. I told Dan Beehler, ‘Dekay contacted us’ and Dan said, ‘OMG this is the perfect guy’.”

You can listen to the rest of the interview with Exciter by The Metal Voice below: