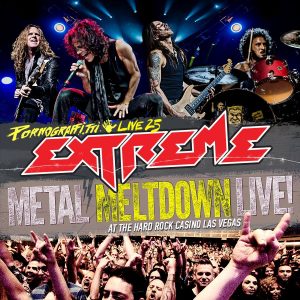 “Last year marked the 25th anniversary of Extreme’s classic multi-Platinum, Grammy® nominated Pornograffitti, the definitive album of the band’s career. To mark the anniversary, Pornograffitti Live 25 / Metal Meltdown will be released September 23 by the award-winning production company Rock Fuel Media in association with Loud & Proud Records as part of their four-part “Metal Meltdown” DVD series. The concert film captures the Boston band performing the album Pornograffitti in its entirety.

Directed by Brian Lockwood (Bon Jovi, Metallica, Motley Crue), the Pornograffitti Live 25 / Metal Meltdown package includes a Blu-ray, DVD, and audio CD of the complete concert that was filmed on May 30, 2015 at The Joint at the world famous Hard Rock Casino in Las Vegas. It also features Rockshow, a bonus documentary that takes fans through Extreme’s story, with exclusive interviews, ‘80s archive footage, and an exclusive photo gallery. Mixed in 5.1 Surround Sound, it’s set for release September 23.

“It was a great thrill to perform Pornograffitti in its entirety,” says singer Gary Cherone. “Some of these songs were never played live before so we had to go back and relearn them for the tour. The album was a watershed moment in the bands career…it’s when we came in to our own and it will always be special.”

As guitar virtuoso Nuno Bettencourt continues, “The band always prided itself on its live performance. Over the years, some of these songs have evolved where the band actually plays them better now than when we had recorded them. Hope you enjoy it.” 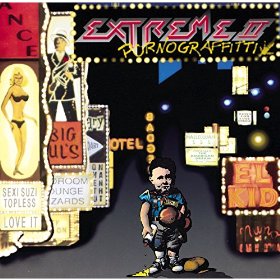 * Songs do not appear on the audio CD.”

Back in September 2003, Sleaze Roxx stated the following in its review of Extreme II: Pornograffitti: “Pornograffitti was the album that put Boston’s Extreme on the musical map. The band’s version of funky pop metal reached the Billboard top 10 and spawned two top 5 singles. “Decadence Dance”, “Get The Funk Out” (with it’s play on words, “this party’s over, so get the funk out”) and “Pornograffitti” are the rocking numbers on the disc. “Li’l Jack Horny” is a word play on nursery rhymes for adults only. However, it was the unforgettable ballads “Hole Hearted” (#4) and the smash hit “More Than Words” (#1) that pushed Pornograffitti over the two million sales mark. Extreme was very good, and this album displayed them at their peak — one can only hope that they reunite one day. Pornograffitti easily receives two thumbs up!”