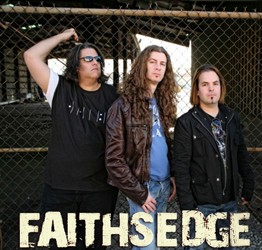 Faithsedge Working On ‘The Answer Of Insanity’ Concept Album

California based rockers Faithsedge are working on the follow-up to their self-titled debut album. The upcoming album is tentativley called ‘The Answer Of Insanity’ and is a concept record based on stories from singer/songwriter Giancarlo Floridia’s life that lead up to the first album with an intresting twist at the end. It’s sure to be melodic, progressive and intense!

After the critical acclaim of the Faithsedge debut around the world the band has a new keyboard player in Eric Ragno. Eric is internationally known for being on many melodic rock albums such as Fergie Fredrickson (Toto), Trixter’s return album ‘New Audio Machine’ and many more. Eric has also performed many live gig’s with legends like Graham Bonnet (Rainbow) to also playing with vocal icons of other genre’s like Dawn Robinson of En Vogue.

Recently inking a worldwide management deal with Germany’s Rock N Growl Management, Faithsedge is a heavy metal/hard rock/progressive project started by Giancarlo Floridia in Huntington Beach, California, in early 2009. Giancarlo has a solid musical background, having previously worked with renowned producers such as Mike Talanca (David Bowie/Foreigner) and Juan Croucier (ex-Ratt) among others.

Giancarlo contacted producer and bass player Fabrizio Grossi (Steve Lukather/Alice Cooper) after not only being impressed with his work on numerous albums as a producer but also with his amazing bass playing skills. Fabrizio has worked with some of the biggest names in the most diverse music genres (George Clinton, Ice T and Cypress Hill are among his endless list of collaborations) and after hearing Giancarlo’s demos put together an incredible band to back up the project along with himself playing bass duties and producing the resulting debut CD.

Alex De Rosso joined Faithsedge on guitar. Having handled live lead guitar duties in Dokken, with whom he toured the world and shared the stage with the likes of Scorpions, Whitesnake, Ratt, Warrant and Firehouse, Alex has appeared on many critically acclaimed albums with artists such as Joseph Williams (Toto/Disney’s The Lion King), Kelly Hansen (Foreigner/Hurricane) and Pamela Moore (also known as Sister Mary from Queensryche’s concept album ‘Operation Mindcrime’).

Tony Morra completes the line-up on drums. Tony owns his own studio in Nashville, Tennessee, the Downtown Batterie, and has played with many great artists such as Rebecca St James and Van Zant. He is also credited with playing on the Grammy Award winning album ‘Songs From The Neighborhood – A Tribute To Fred Rogers’ in 2006 and for touring as a member of pop legend Stevie B’s Band and Sweet Sensation. Tony has also played drums on different movie soundtracks such as ‘Chronicles Of Narnia’ and ‘Just Married’ to name a few.