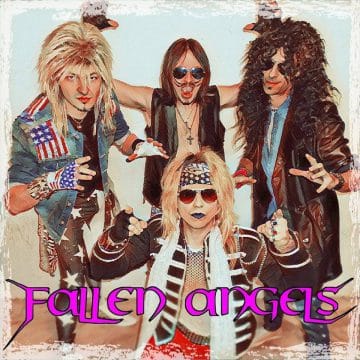 “Fallen Angels were born in 2011 from an idea of Matthew Ice and Ste Wizard. They were born as a cover band for a kind of music that has influenced the world in the eighties, the Glam Rock. Among the covers the band brings back songs from the most representative groups of that period: Motley Crue, Poison, Ratt, Europe, Aerosmith and many others.

With the entry in 2014 of the new frontman Matty Mannant and then of the drummer Luke Gyzz, the group, after a period of research of classic sound, began devoting themselves to writing their own unpublished pieces.

Finally, having fully settled their formation, they spent year 2017 perfecting their first full debut album. Even Priest Knows is the title of their first album, proposing the rebirth of a kind of music adding an original and versatile touch with different musical nuances without ever abandoning the rock vein that distinguishes it.”