Falling Red release video for “Hell In My Eyes”

UK rockers Falling Red have released a video for their song “Hell In My Eyes” from their new studio album Lost Souls, which was released on March 16, 2018.

The group’s “Biography” on its website states in part (with slight edits): 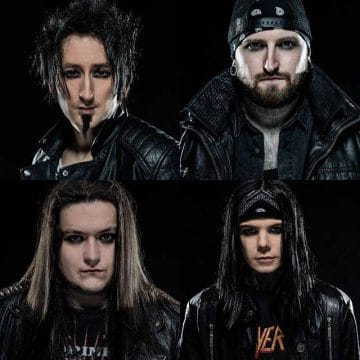 “Falling Red are a bunch of stylish, Cumbrian-based, lifeblood heavy-rockers who deliver exhilarating live music to everyone they meet.

Their sleaze meister rock ‘n’ roll metal numbers are mostly assembled by two scuzzle-highway, sweat-sockers named Rozey (pronounced “Rosie” — he’s the frontman of the band and their lead guitarist) and Dave (he’s the drummer). Dave & Rozey have played in the band since its formation. They establish the songs which become thunderously embellished by the other founder-member (welcome back the original angry-man Shane on guitar) and Mikey, who joined the band later, who plays bass. Everybody offers vocals.

Famously, these British good-time rockers do not take themselves too seriously, “When we play live shows we find we need to participate in all the party-time antics, so we offer thrill-rides a-plenty. We supply vibrating sensations, ecstatic tingles and the best rockin’ time of your life.”

Despite their crazy hair, entertaining use of industrial-strength make-up and general randy-dandiness, these Cumbrian dirt-moguls are not posers from the suburbs. No, they’re gallant protagonists of an impoverished state, proud of their humble rural condition. As a result, they’ve found they need to work around the clock to get themselves heard.

And, although they are often compared with Mötley Crüe and Guns N’ Roses, they insist they are not really a spangly-fangled hairspray act at all, “We’re peasant metal, if anything…” they suggest. “We play a little country rock, some metal, some sentimental ballads and, of course, lots of the hard rock we are known for! None of it is too abrasive or angle-grinding. Our material’s got great guitars, hard-rocking power chords and rejuvenating harmonizations. We like the definition “post-sleaze” because it kinda recognizes that we offer something a bit different.”

However, the boys have toured/shared the stage with Sebastian Bach, Ugly Kid Joe, Steel Panther, The Dirty Youth and other glam-bands in the past. “We have developed a thick skin,” they explain. “We realize that people will always make comparisons.”

Do their songs have political messages? “Hell no! But we hate the way of the world right now. It’s so full of schemers, scammers, false gods and dictators. We particularly hate the idea that money seems to buy everything these days: it even buys talent, power, love & forgiveness. If anything gets us riled it’s all the greed. So we write impetuously about truth, courage and having fun. We believe that we should all live life to the fullest and have fun while we’re doing it. That’s our main message. ”

“Musically, we’re like a cherry-red ’69 Dodge Charger — a pulsing super-bee filled with charisma — all we wanna do is take you on the ride of your life.”

Falling Red only transform into touring-band super-sluts once they’re on stage. By day they’re honourable, hard-working, bucolic countrymen. By night the energy of their Sunset Strip musical lineage becomes clear. That’s when the crotch-rocking, madcap fury is properly revealed. It’s also when you find that this band are very capable of kick-ass guitar, stick-it-to-ya percussion, explodinating bass lines and intoxicating songs that seem filled with electroluminescence.

The official video for the brand new single, Hell in my Eyes taken from the new studio album Lost Souls.(C) Fallingred2018Official Website www.falling-red.co…