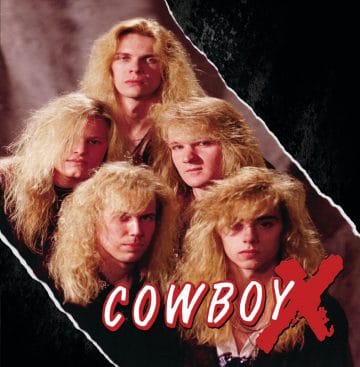 “It was early 1990 and the local music scene in Nebraska was awash with bands covering 80’s hair metal and not many bands were writing & recording original music. Fed up with the bar band and cover tune attitudes of so many bands, Cowboy X was developed with original music in mind. The band consisted of former members of Airstrike, who had a very successful independent release, as well as members of BLITZ’N, Z-92 Radios Local Lick’s winner.

Cowboy X is Gregg Lee on vocals, David Marshall Hughes and Barry Engle on guitar, Randy Cotton on bass, and Michael Watson on drums. The band recorded six songs of its 30-song catalog for Direct Hit Records as an EP/ demo for major record labels. Shotgun Management and Direct Hit Records’ intentions were to have Cowboy X finish recording a full-length release, then do a full club/hall tour in the Midwest at the end of 1990 before signing with a major label. They drew the attention of some big hitters in the industry, however as we know, the music scene at that time was about to change very dramatically away from LA style hard-rock & metal toward Seattle based grunge & alternative.

These tracks were recorded on the Tascam Model 238. The machine recorded 8 tracks on a cassette format which was able to be slaved together giving the band 16 total tracks. The 6 songs on the EP released in late 1990 were tracked in the basement studio of drummer Michael Watson who ran a part-time business under the name Skeleton Crew Music. They were mixed and mastered down to ¼ tape in a local professional studio IEV Productions by engineer Randy Figueroa and studio owner Tom Lippold. Amazingly, the Cowboy X EP final product came out of the same studio with a very similar release date to 311’s Dammit. Although the musical shift was clearly happening, the sales of the Cowboy X EP did very well into early 1991. Another notable accomplishment of Cowboy X was a sold out Sokol Auditorium show in 1990. Cowboy X and 311 although in entirely different musical veins supported one another as original Omaha acts, one went on to fame and the rest is Omaha music-scene folklore.

This collection of songs is the sample of that time in history and includes demo tracks from the BLITZ’N (Watson / Hughes / Willison) and Gregg Lee catalogs along with the Cowboy X 6 song EP.”

This album is available for purchase at: http://fnarecords.net/index.php/cowboy-x.htmlCOWBOY X Is: Gregg Lee – Vocals David Marshall Hughes and Barry Engle -…