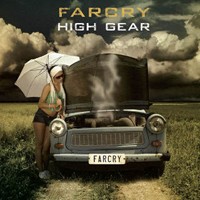 FarCry are hot on the heels of their critically-acclaimed Kivel Records debut “High Gear,” and are poised to make their triumphant New Jersey debut Sunday, April 25, at the KatManDu nightclub. The band has played several high-profile shows around the US , sharing the bill with such rock icons as Bret Michaels, Firehouse, Skid Row, April Wine, Dokken, and Enuff Z’Nuff.

This event represents more than just an amazing rock show, but also the homecoming of Trenton native Mark Giovi, FarCry front man, and a vocalist with a prolific list of accomplishments to his name. Although he has performed around the world in a variety of capacities, Giovi still admits, “there is no place like home.” Currently living in Las Vegas , Giovi is the featured singer in the nightly hit show “Bite,” and is also one of the founding members of the Las Vegas Tenors.

Joining Giovi is guitarist extraordinaire Pete Fry. Both musicians had coincidentally played together in the burgeoning Trenton hard rock scene of the 80s and 90s, and were miraculously reunited by producer John Kivel in the interest of forming a rock and roll super group, which became FarCry.

Fry and Giovi are ecstatic to finally be able to play in their hometown, since this is the band’s first area appearance. “This will be our first show in NJ, and it is exciting. I’m looking forward to do the new songs for family, friends, and fans I have not seen for a long time. I can’t wait,” said Giovi. Pete Fry echoes this sentiment and adds, “Not only is it great to play for the home crowd, it’s almost a surreal experience to share the stage with Mark after so many years. Better still to share the bill with Harmzway is awesome… Like stepping back through time… To ROCK!”

Opening band’s Harmzway is also celebrating an exultant reunion after a 15-year hiatus, reigning as a hardworking regional band in the late 80s and early 90s. Members Carmen “Doug” Bitonti (Vocals/Bass), Damon Duchai (guitars), and Joe Suarez (drums) plan to hit the ground running and prove that time has not diminished their edge in the slightest. Kicking the night off with a special acoustic set is Goodbye Thrill.