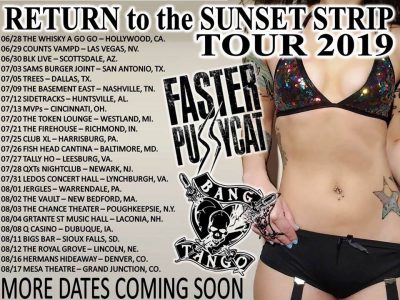 Returning to the Sunset Strip appears to be the latest trend. With Steel Panther still touring behind their Sunset Strip Live mantra, it is now the turn of Faster Pussycat and Bang Tango to team up for a Return of the Sunset Strip tour this summer.

Sleaze Roxx caught Faster Pussycat playing live at The Montage Music Hall in Rochester, New York, USA back in late July 2018 and stated as follows in its concert review:

“With one very hard act to follow (Paradise Kitty), Faster Pussycat were up next. Having seen Faster Pusscyat play before (in 2013 and recently at the M3 Rock Festival earlier this year), I knew exactly what to expect from the band simply because there aren’t many changes to the setlist and show. Everything starts off with band stalwart Taime Downe. Although I am definitely happy to see Downe rocking away and doing seemingly well after his health scare last year, the singer unfortunately doesn’t move a whole lot on stage and hardly tries to even connect with the audience. Aside from saying something to the likes of “How is it going motherfuckers?” and “We’re Faster Pussycat”, Downe lets the music do the talking.”