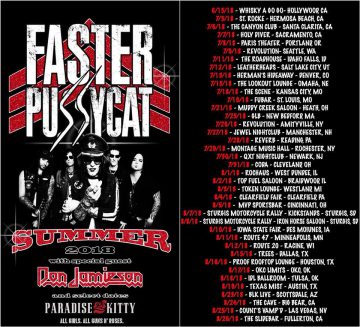 Sleaze rock veterans, Faster Pussycat, have a busy summer ahead of them as the group will be playing 38 shows during the months of July and August 2018 with more to reportedly be announced later on. Comedian and former That Metal Show co-host Don Jamieson and all female Guns N’ Roses tribute band Paradise Kitty are scheduled to open for Faster Pussycat.

Sleaze Roxx attended the M3 Rock Festival earlier this month and stated the following in its concert review of Faster Pussycat‘s performance:

“After their historic gig without frontman Taime Downe at the M3 Rock Festival last year, Faster Pussycat were back with an apparently clean, sober and healthier Downe in the line-up. I remember back in the late ’80s when Faster Pussycat‘s debut album was released, L.A. Guns‘ self-titled album and Guns N’ Roses‘ Appetite For Destruction came out at around the same time and at that time, I treated each release kind of on equal footing. It’s always interesting to me how Guns N’ Roses exploded to become one of the biggest bands in the world while Faster Pussycat and L.A. Guns have had respectable music careers but nothing even close to Guns N’ Roses‘ level of success.

I’ve always loved the early Faster Pussycat songs, which never seem to get old when I hear them live. My one complaint about seeing Faster Pussycat live is that it’s always virtually the same. Downe stands in one position for most of the show without really addressing the crowd while the band delivers pretty much the same set time and time again. So as much as I enjoy Faster Pussycat‘s setlist, their live performance doesn’t really do that much for me. Perhaps that is why I haven’t seen Faster Pussycat perform live for over five years. In any case, Faster Pussycat put on their usual set, which was enjoyable to listen to. My favorite songs played this time around were “Cathouse,” “Don’t Change That Song” and the set closer “Babylon.””