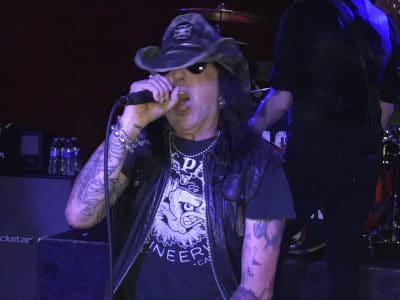 In terms of what has been going on with Faster Pussycat, Downe indicated (as transcribed by the 80’s Glam Metalcast podcast with slight edits): “Been working on new shit… going through old shit. A little bit of this, a little bit of that. Just sitting around. We were supposed to go to the UK and do some shows and then were we gonna go to the studio. Then everything got shutdown for shows, so we went right to recording. It’s not really a full record. We did three new songs and a couple covers. Gilby Clarke just mixed the first one. So we have the first mix done for one of the tracks. I wanna do singles. Put out a 7″ vinyl single and then have something weird as the B side. Like one of these old demos I have been going through lately.”

With respect to Faster Pussycat‘s biggest hit “House of Pain”, Downe stated: “It took a few times to write that one. Me and Greg (Steele) put that together. We were at the stage where everyone had to have a ballad. We really didn’t want one. The label was like “See what you guys can do”. Me and Greg decided to write one that wasn’t hokey. At the time there was a lot of hokey ones. It was just flooded with fucking power ballads. We decided to write one that was true. Michael Bay (from Transformers) directed the video. Can you fucking believe that?”

You can listen to the interview with Taime Downe by Metal Mike for the 80’s Glam Metalcast podcast below: