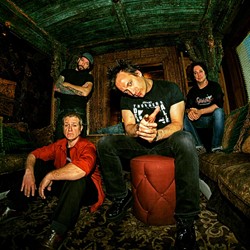 The Sin City Sinners, featuring original Faster Pussycat guitarist Brent Muscat, have launched a fundraising campaign in order to complete their new album. If the band manages to raise $30,000 in the next two weeks Faster Pussycat singer Taime Downe has agreed to reunite with Muscat on the disc.

The Sin City Sinners plan to travel Saint George, Utah in mid July to work at Hit Track Studios with Tom Parham, who engineered the band’s last two records. Not only will this CD feature the guest artists performing their favorite covers, but the band will also record a few brand new original tracks.

“The Sinners have always been an independent band,” states the group, “We have self produced, manufactured and released all of our own records and merchandise, which has been quite an expensive undertaking. When we first heard about sites such as Kickstarter, it seemed like panhandling, but after looking into it we realized that it’s not asking for handouts, but rather selling an exclusive product or opportunity directly to someone who may want it. Record company’s are dead, why not let the fans invest in the product they want. This is a win win situation for the fan and the artist. Sin City Sinners & Friends are going to record a new CD with some of your favorite Rock Stars as guests, the more we raise the bigger the profile of guests!”

On the 4th of July the Sin City Sinners will appear at Las Vegas’ Count’s Vamp’d, as they present Metal Night 2. The Sinners will be joined by special guests Jeff Young (formerly of Megadeth) and Jeff Duncan (Armored Saint) to perform all your heavy metal favorites including Anthrax, Armored Saint, Black Sabbath, Dio, Iron Maiden, Judas Priest, KISS, Metallica, W.A.S.P. and more. This is a free show and it starts at 10pm — for those outside Las Vegas you can watch the show online via Stageit, tickets are available now at www.stageit.com/sin_city_sinners/metal_night_2_w_special_guests_jeff_young_megadeth_jeff_duncan_armored_saint/25619.