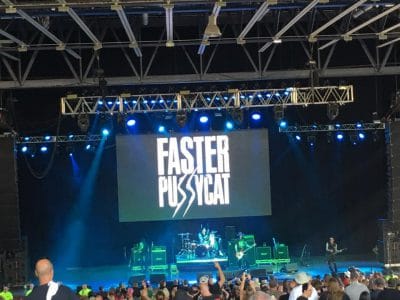 With Faster Pussycat frontman Taime Downe suddenly sidelined and having to be hospitalized yesterday for at first what was reported as a severe case of bronchitis, which was later confirmed to be pneumonia, the sleaze rockers’ appearance at the M3 Rock Festival today appeared to be in jeopardy.

In fact, the following message was posted on Faster Pussycat‘s Facebook page by guitarist Ace Von Johnson earlier today in that regard:

“Hey gang, Taime is still currently in the hospital, suffering from a very severe case of pneumonia. I’m unsure of where that leaves our performance for today at M3, however his health is our main concern. We ask that you leave any well wishes here on this thread, rather than direct messages, emails, etc. – just know he is on the mend currently. Thank you for your understanding. –Ace“

History was made at the M3 Rock Festival as Faster Pussycat played live without singer Taime Downe and with his replacements being a slew of singers taking turns including Dangerous Toys and Broken Teeth frontman Jason McMaster (on “You’re So Vain”), Vixen singer Share Ross (on “House Of Pain”) and Danger Danger and Tokyo Motor Fist lead vocalist Ted Poley (on “Bathroom Wall”).

Faster Pussycat with Share Ross on lead vocals for “House Of Pain” at M3 Rock Festival on April 28, 2017:

Faster Pussycat with Jason McMaster on lead vocals playing “You’re So Vain” at the M3 Rock Festival on April 28, 2017: