Faster Pussycat have some big plans for 2021. The group recently announced that it was going to release a new single titled “NOLA” on May 21st. There will now be a second song titled “Pirate Love” that will also be released on that day and both tracks will be premiered on Trunk Nation with Eddie Trunk on May 20th. 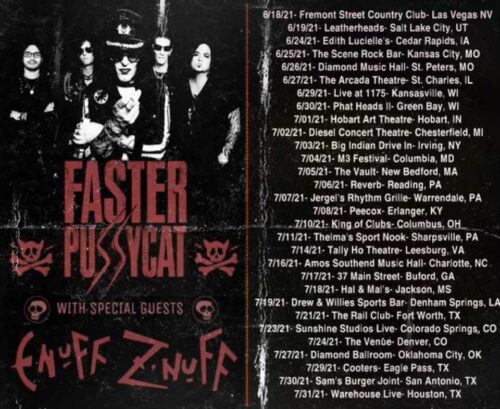 Sleaze Roxx caught Faster Pussycat performing live at Club XL Live In Harrisburg, Pennsylvania, USA back in July 2019 and stated as follows in its concert review:

“And then, it was time. The moment I had waited months to see. The lights in the club dropped, and much like a sky full of dark clouds warn of an approaching storm, Faster Pussycat took the stage. From the first chords of “Where There’s A Whip There’s A Way“, I knew it was on. The hard hitting “Jack The Bastard” followed it up, and as I was listening I couldn’t help but think that the Whipped! album should have been bigger for the band. There’s a lot of great material on that record, but unfortunately it was released in a time when the musical tide was shifting. It was cool to hear the album revisited later in the show via Friends, which is new to Faster Pussycat’s set. The Stones-y ballad is a nice addition to “Jack The Bastard”, which has been a staple in their setlist for quite some time. I’m often intrigued at how bands choose which songs they’re going to play and this was one of those moments. If I had to guess which song they would have added from Whipped!, it would have been the single “Nonstop To Nowhere”, but I’m certainly not complaining. Speaking of staples, “Cathouse”, “Bathroom Wall” and “Don’t Change That Song” were all present and accounted for. Again, no complaints from me. Bassist Danny Nordahl took over lead vocals in the middle of “Bathroom Wall” for a short detour into “Pretty Fucked Up” before resuming course for the finale of the song. Those songs from their eponymous debut still sound great live, thirty years later.

Three covers were tackled during the show, and the true surprise of the evening came in the form of one originally recorded by INXS. Their decision to take on “Don’t Change” by the Australian pop / rock band had me scratching my head at first, but it actually sounded great. Michael Hutchence from INXS and Taime Downe sound nothing alike vocally, but their uptempo take on the original version just worked. Props to guitarist Xristian Simon for his execution of those new-wave, synth sounding guitar parts. It’s commendable to me when bands cover a song by another artist and really make it their own. In the case of “Don’t Change”, I think Faster Pussycat have certainly accomplished that. Another surprise for me was the new band member up on stage with them. Budderside guitarist Sam “Bam” Koltun has joined Faster Pussycat for their summer jaunt, and he fit in really well with the rest of the band. You’d never know this was his first tour with them. I thought that his style of playing fit right in with the other members of the band and he brought a lot of energy and enthusiasm to their performance. Not to mention his flawless guitar solos. “You’re So Vain” and “Shut Up and Fuck” by Betty Blowtorch rounded out the cover songs in the set.

It’s hard to believe that it’s been 13 years since we’ve heard any new music from Taime and the guys. The Power And The Glory Hole came out in 2006 and I’d say that new music is long overdue. Even if they were just to release a few new songs, I’d be satisfied with that.”