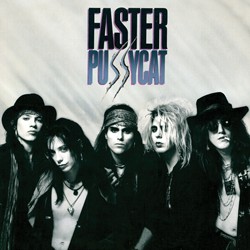 Back in the mid ’80s, if you were an aspiring sleaze star, LA’s Sunset Strip was the place to be seen and heard. Sure, the legendary Hollywood street may have produced many a rock God since the mid ’60s and had continued the grand tradition throughout the next couple of decades, giving rise to the likes of Quiet Riot, Motley Crue and Poison amongst many others. But it was the latter bands that sowed the seeds for an even wilder explosion of talent in the late ’80s.

Taking their influence from the roots of glam rock and fusing it with a pinch of punk, a new strain of Sunset Strip bands started to emerge. It was a scene that included L.A. Guns, Jet Boy, Guns N’ Roses and Faster Pussycat amongst its main offenders. Revolving around legendary clubs such as the Cathouse and the Roxy, these acts placed an emphasis on looks and hooks rather than musical ability. It was an attitude that quickly made stars out of Guns N’ Roses with bands like Faster Pussycat following hot on their heels.

Guitarist Brent Muscat’s new band Sin City Sinners is celebrating their six year anniversary. Recently the group was successful in raising $30,000 towards the recording of two new albums, ‘Divebar Days Revisited’ and ‘Christmas In Vegas’. The albums are currently being worked on and will feature several guest appearances, including Taime Downe and Danny “The Count” Koker of TV’s Counting Cars.