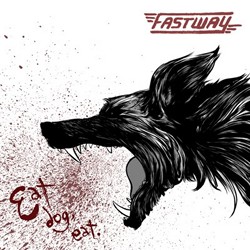 Fastway, featuring former Motorhead guitarist Fast Eddie Clarke and Little Angels vocalist Toby Jepson, have posted their new single “Leave The Light On” online. The song is taken from the band’s upcoming album ‘Eat Dog Eat’, due for release on November 11th in Germany and November 14th in Europe through Steamhammer/SPV.

Formed in 1983 the first album ‘Fastway’ entered the UK Charts at #43 and received very good reviews. One year later ‘All Fired Up’ was released and due to high profile support tours in the US with Scorpions and Rush, the album was a great success.

In 1985 ‘Waiting For The Roar’ saw the light of day and Fastway supported AC/DC on their ‘Fly On The Wall’ tour over the whole of Europe. 1986 the band wrote the soundtrack for the horror movie ‘Trick Or Treat’ starring Ozzy Osbourne and Gene Simmons.

After 1986 Fastway released two more studio albums with a different line up and several live and best of albums.

‘Eat Dog Eat’ is the first new studio album since 1990. Together with new vocalist Toby Jepson (Ex-Little Angels) Fast Eddie Clarke wrote some of his strongest songs. “Leave The Light On” or “Sick As A Dog” are only two examples from this varied album.

Fast Eddie Clarke reckons: “By far the best thing I have done since the first Fastway album. THIS IS CLASSIC ROCK AT ITS BEST!!!!!!!”

Steamhammer/SPV is proud to have Fast Eddie Clarke and Fastway on their label for Europe.

Olly Hahn, A&R Steamhammer says: “It`s an honour to have Fast Eddie Clarke and his band on our label. He was THE guitar player in Motorhead but also with Fastway he delivered awesome music. With ‘Eat Dog Eat’ he`s definitely back… probably better than ever!”