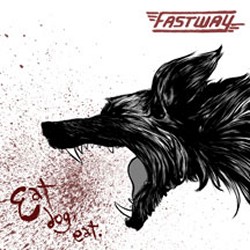 MVD Audio will be relasing the long awaited Fastway album ‘Eat Dog Eat’ on April 10th in the United States. This is the first Fastway album in over 20 years.

After the shows of 2007, Fast Eddie Clarke (ex-Motorhead) and Toby Jepson (ex-Little Angels) began casually working on ideas and over time managed to gather enough for a full blown record. Toby took on the role of producer and also played bass and sang all the main vocals. Eddie and Toby were joined on the drums by Matt Eldridge whom has long been Toby’s drummer of choice.

The record was created at Chapel Studios with Ewan Davies as the engineer and mixer.

Toby says, “We have collaborated closely on all aspects of the recording, specifically wanting to create a performance based, un-apologetically raw album that was song driven and above all made with passion. This we did, eschewing multi layered, heavily edited recording in favour of the simple ‘warts and all’ dynamics. I think the results are real. We hope you do to.”

Formed in 1983, Fastway’s self-titled debut album entered the U.K. charts at No. 43 and received very good reviews. One year later, ‘All Fired Up’ was released and was a great success, thanks in no small part to high-profile support tours in the U.S. with the Scorpions and Rush. In 1985 ‘Waiting For The Roar’ saw the light of day and was followed by dates with AC/DC on their ‘Fly On The Wall’ tour. In 1986 Fastway wrote the soundtrack to the horror movie ‘Trick Or Treat’ starring Ozzy Osbourne and Gene Simmons.