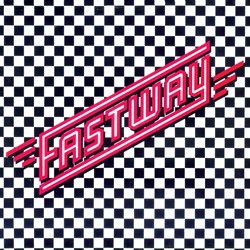 Fastway’s 1983 self-titled debut has been reissued, with an additional seven tracks, by Rock Candy Records — and can be purchased at www.rockcandyrecords.com.

Fastway was originally formed by Motorhead’s Fast Eddie Clarke and former UFO bassist Pete Way — men out on the hunt, looking to start a new and improved musical unit that would fuse traditional British hard rock (think Led Zeppelin, Humble Pie, the Who) with the energy and enthusiasm of the NWOBHM. Sadly Pete Way’s tenure was short-lived leaving Fast Eddie to write and record the album with a session bassist, drummer Jerry Shirley (from Humble Pie) and — then unknown — Irish vocalist David King.

Issued in 1983 and produced by veteran studio wizard Eddie Kramer (Led Zeppelin, Jimi Hendrix, KISS) ‘Fastway’ cut an impressive form in a world obsessed with glam rock and thrash metal. Embracing traditional values and emitting a sense of rough-hewn charm, Fastway’s music was big on riffs with clever use of melody and songs that packed a punch. In America the record found an enthusiastic home, helping to propel it into the Billboard top 30 charts attaining gold status, with the singles “Say What You Will”, “Easy Livin”, and “All I need Is Your Love”.

The reissued CD includes 24-bit remastering from the original source tapes, 7 bonus tracks, a 3,500 word essay about the making of the album, new interviews with Fast Eddie Clarke, enhanced artwork and previously unseen photos spread out over a 16 page full colour booklet.