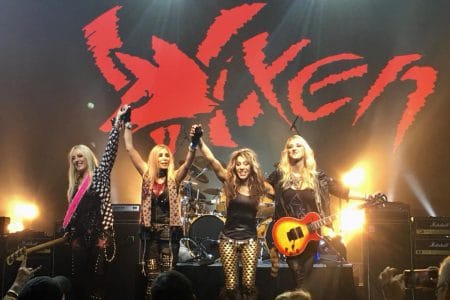 With Vixen frontwoman Janet Gardner still recovering from her emergency hospital surgery to take care of a subdural hematoma, which necessitated that a hole be drilled into her head and a titanium plate be placed to cover the hole, Vixen had an old friend fill in at their gig at Choctaw Casino & Resort in Durant, Oklahoma, USA on March 3, 2018.

The friend in question happened to be the ageless Femme Fatale singer Lorraine Lewis who flew in for the gig and seemingly more than handled her own as Gardner‘s replacement for the night.

The following message was posted on Lewis‘ Facebook page a few hours ago:

“#soundcheck yesterday with the fabulous Vixen girls. Honored to sit in for Janet while she recovers. Durant Oklahoma. More pics soon. Thank you for letting me share the stage with you all! #sistersinrock

Vixen with Lorraine Lewis singing Femme Fatale’s “Waiting For The Big One” in Durant, Oklahoma, USA on March 3, 2018:

Snippet of Vixen with Lorraine Lewis singing in Durant, Oklahoma, USA on March 3, 2018: