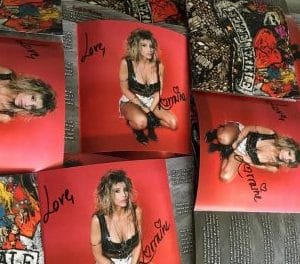 The wait is finally over. Femme Fatale‘s long lost Lady In Waiting album which was recorded 25 years ago, will be released in three days on May 10, 2016 via FnA Records. The album will no longer be called Lady In Waiting but rather One More For The Road. 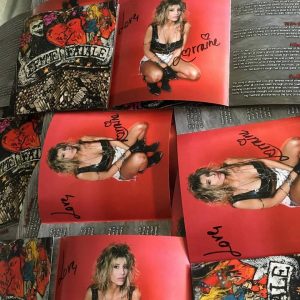 Femme Fatale posted the following message on their Facebook account yesterday: “Something is happening. In 4 days. Femme Fatale‘s “One More For The Road” will be released on F n A Records! These songs were recorded over 25 years ago and are finally seeing the light of day. I’m excited for you to hear what went down. Stay tuned and stay rock! #femmefatale #onemorefortheroad #buriedalive #ladyinwaiting and more! ? — in Los Angeles, California.”

Back in April 2016, Sleaze Roxx interviewed Femme Fatale‘s leader and frontwoman Lorraine Lewis who stated the following about the release of One More For The Road during Part 1 of her two-part interview: “Actually, it’s not even called ‘Lady In Waiting’ anymore. It’s actually called ‘One More For The Road.’

Yeah. “One More For The Road” which is a great rocking track that Femme Fatale reincarnated have been doing at our live shows and Michael Grant from L.A. Guns has been joining us so we have a three guitar line-up on that song. But yeah, the release is called ‘One More For The Road’ on FnA Records. I am actually looking at a stack of a hundred CDs that I need to autograph and get back to FnA Records so we can do the official launch. But yeah, finally! I am so excited about these tracks. You know, the thing with this CD is that it was recorded over 25 years ago. So, it’s not even that we were in a studio. It’s not a studio — lots of hours with an engineer and a producer. It was basically the band. We went into a rehearsal studio. It was a rehearsal studio in the valley. I can’t even remember the name of it right now. But we went in. We had a snake from the board, from the control room to the rehearsal room where we were playing and we knocked out — I don’t know — 13, 14 songs and we recorded it to tape. Toby Wright engineered 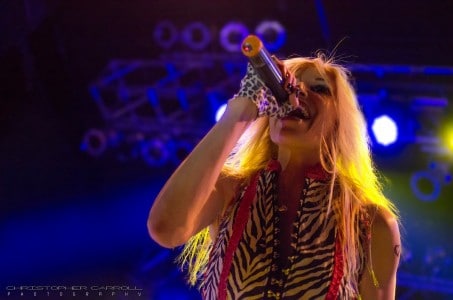 it. He has done a lot of stuff for Heart. He is also a guy from our hometown of Albuquerque, New Mexico. He was there kind of managing boards.

We did everything live one song after another like it was a live performance and that is what has now become, 25 years later, the Femme Fatale CD ‘One More For The Road.’ And it’s raw, it’s edgy. It totally has that live feel to it because that’s exactly how it was recorded. It’s not like we went back in and you know, redug a bunch of tracks and “Oh. The guitar player made a little mistake here. Let’s fix that.” I mean, it just is what it is. And it’s really cool! I’ve been carrying this thing around with me [laughs] for a really long time! I actually had it on a cassette tape because the masters got recorded over and I had all the songs on a cassette tape which I then transferred to a CD and then I carried that around with me for like — I don’t know — 15 years [laughs]? And then uh, you know [laughs], it’s just all really crazy but it’s cool! I’m looking at it right now and the cover, it’s all…

It’s a nostalgic day today because the cover of this is actually my leather Femme Fatale jacket that I used to wear back in the day. I still have the jacket. I bought the leather at some store on Melrose and then I used to pay this guy — the drummer for Motorcycle Boy, another Hollywood / Sunset Strip band — and I used to pay him to stud my jacket. Anytime I had like 20 bucks, I’d stop by his place — a store that he worked at on Melrose. I would stop by and I would give him 20 bucks and my jacket and I’d say, “OK. Do what you can for 20 bucks.” And so he, with his own hands, studded this jacket and it’s really cool! So that’s what the cover is of this CD, the artwork of it. And Jackie King who did a lot of my costuming back in the day, he painted the jacket with Femme Fatale and like a chick which I think is me in a bustier [laughs]. It’s pretty cool so I am really happy about it and I 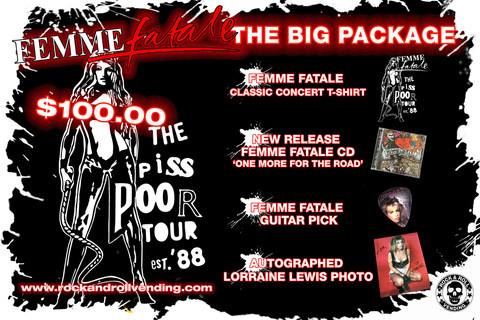 can’t wait for people to hear it because it’s just what was going on at the time. It’s real, it’s raw and it’s rock n’ roll!”

You can also read Part 2 of Lewis‘ interview with Sleaze Roxx here.

Femme Fatale are offering a special promotional package called “The Big Package” via the website Rock And Roll Vending for Lewis‘ clothing line and accessories.