Finnish rockers Shiraz Lane have announced today on their Facebook page that they have signed with Frontiers Music Srl and are aiming to release their “debut” album in the spring of 2016.

Earlier today, Frontiers Music Srl announced in part on its Facebook page that: “Frontiers Music Srl is excited to announce the signing of one of the hottest newcomers in the current Hard Rock scene: introducing Shiraz Lane from Finland! Straight to the business: can you imagine The Darkness, Skid Row, GN’R, Warrant, Hardcore Superstar and some young 2010’s energy combined together? Then put a peace sign to it and you have Shiraz Lane – one of the most talented new bands coming out from Finland in the past few years! Not convinced yet? Then hear and believe it and enjoy the videos taken from the band’s debut EP Be The Slave Or Be The Change… Even if the current lineup has been together for a bit more than one year, Shiraz Lane won already several big band competitions and – what is the most important thing – fans hearts on their side around the world. The guys are in their early 20’s, but already now true live show machines, very work-oriented and ambitious in playing live wherever and whenever possible. They’ve already been spreading their rock hurricane around their homeland Finland, Canada, Tokyo and this year in Wacken Festival in Germany too. Shiraz Lane will be touring all across their homeland this fall and is getting prepared to record their debut studio album later this year with a look to release the debut full length in the Spring of 2016.

The band says: “We are thrilled to join the ranks of a record company which is authentic, committed and has absolute reliance in our band. In addition, we are truly humbled and honored to be set side by side with numerous of our idols – including Whitesnake, Toto, Journey, Sebastian Bach, etc… No doubt this is a start of a fruitful, reliable and most importantly Hard Rocking musical symbiosis!” Set your stereos to 11 and be prepared to let their music get you to a place where good Rock is still alive & kicking! Shiraz Lane is: Hannes Kett – vocals / Jani Laine – solo guitar / Miki Kalske – rhythm guitar / Joel Alex – bass / Ana Willman – drums.” 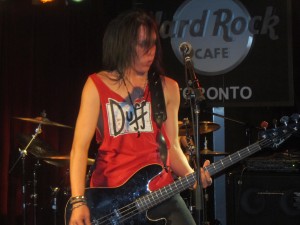 Sleaze Roxx was in attendance when Shiraz Lane got to play in Toronto, Ontario, Canada back on November 13, 2014 after they won a contest called Hard Rock Rising Helsinki — which was essentially a battle of the bands culminating with the grand prize being a trip to play a show at the Hard Rock Cafe Toronto. Sleaze Roxx stated in its review of that show: “Next up was Shiraz Lane, whose band members looked a little bit like a young but slightly more polished version of Guns N’ Roses. The similarities were uncanny with [Joel] Hiljanen looking a lot like Duff McKagan, minus the height, tattoos and hair color (he even sported a tank top with the word “Duff” on it), and rhythm guitarist Miki Kalske reminding me of Izzy Stradlin with his little cap.” Sleaze Roxx added: “All of the band’s songs had that sleazy hard rock and metal feel so prevalent in the late ’80s, yet with a fresher sound… My favorite songs from Shiraz Lane surprisingly didn’t include their single and the track that I had heard at least ten times prior to the show — “Out There Somewhere”. That tells you how good the band’s material was, considering the one song I was most familiar with and which brought me out to the concert in the first place was not one of my favorites played that night.”

Story To Tell – a music video by Shiraz Lane. This is the final track from “Be The Slave Or Be The Change” EP, which you can find on iTunes, Spotify, Google …