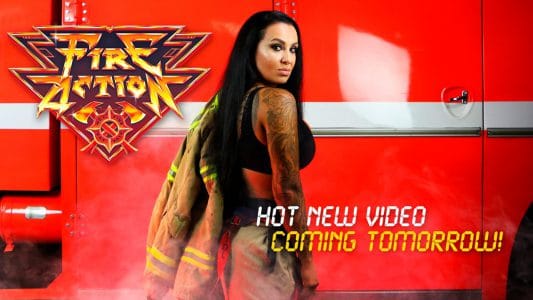 “This is the moment we have been waiting for: Tomorrow is the world premiere of our new music video “Hard Days, Long Nights”. It will be full of hot and humid Fire Action, so stay tuned and keep your extinguishers ready! ????”

“It’s always difficult changing lead vocalists and that is exactly what has happened to Finnish rockers Fire Action as their new EP Fahrenhater features a new singer by the name of Gary J. James, which really seems to have changed the band’s overall sound. Back in September 2016, I reviewed Fire Action‘s three-song EP Rock Brigade and thought that the guys mastered the ’80s sound quite well. Fire Action‘s singer at the time — Leo Barzola — had a grittier and more screaming type of delivery, which kind of shaped the band’s sound.

Although all of the same players are there (except Barzola) for Fire Action‘s new EP Fahrenhater — guitarist Juri Vuortama, bassist Jani Hongisto, drummer Samuli Häkkilä and producer Panu Pentikäinen — Fire Action almost sound like a brand new band with their new lead vocalist Gary J. James. The sound is still definitely reminiscent of the classic ’80s hair metal era but it’s a lot different than what could be found on Rock Brigade. I confess that I haven’t heard the entire Rock Brigade EP since reviewing it but listening to the title track and “Lady In The Dark” again, there is no question that the addition of James has made a huge difference to Fire Action‘s overall sound.”