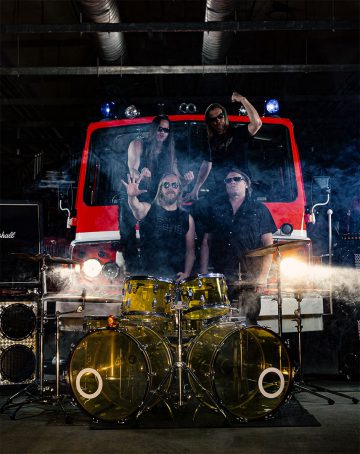 “Already known for big choruses and mid-tempo metal tunes, the Finland’s riff machine rev it up this time. “Fire Action” is inspired by faster numbers of ’80s hair giants Ratt and Dokken as well as great old school speed and thrash delivered by Laaz Rockit, Vicious Rumors and early Metallica.

The music video for “Fire Action” was filmed in local firehouse museum in Helsinki, Finland. The vintage fire engine seen on the scene is fully restored Fargo model 1974.

There will be more about the Fargo on the subsequent promo video to be unleashed later in 2020 along the third Fire Action CD. Prepare for genuine ’80s style storyline music videos with hot chicks and dangerous curves. This is only a beginning…”