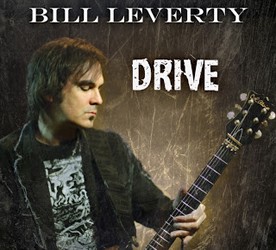 Says Leverty, “These songs were all very personal. In choosing these songs to cover, each had to be a song that I loved before I started playing guitar, that I still love today, a song that hadn’t been covered to death in the genre, and a song that I thought I could put my own spin on, while still staying true to the original recordings. That narrowed it down to these ten songs.”

Hailing from Richmond, Virginia, Bill Leverty and Firehouse first gained recognition in 1991 when they won the ‘Favorite Heavy Metal/Hard Rock New Artist’ from the American Music Awards. Signed to Epic Records, Firehouse would go on to release several hit songs throughout the ’90s such as “Don’t Treat Me Bad”, “Love Of A Lifetime”, “All She Wrote” and “Reach The Sky”, to name a few. The band sold over 2 million copies of their debut album ‘Firehouse’, and sold close to a million copies of their second album ‘Hold Your Fire’ in the US alone. For their 3rd release the band secured the production chores of famed producer Ron Nevison (Led Zeppelin, Ozzy Osbourne, Damn Yankees, UFO, etc). ‘Firehouse 3’ went on to be another big seller, especially in Asia. Their next release ‘Good Acoustics’, the first of several albums produced by Bill Leverty, won them a Gold record in several countries. Firehouse would go on to release 5 more well-received critically acclaimed albums as well as successful world tours throughout the 2000’s. The band to this day continues to tour playing their back catalog of hits to cheering fans everywhere and has sold over 6 million units worldwide!