FireHouse‘s long-time guitarist Bill Leverty has released a new single “Divided We Fall” and you can purchase and hear a snippet of the song via his website.

The guitarist’s “Bio” on his website indicates the following for his “Early Years” (with slight edits): 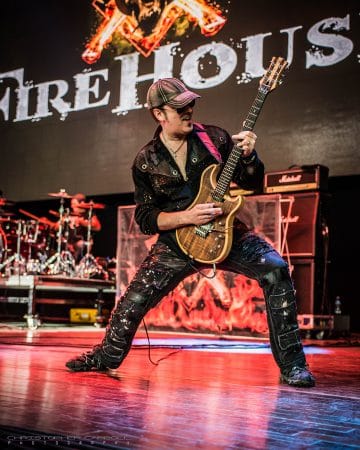 “My history with FireHouse begins when my band White Heat needed a drummer. We auditioned at least twenty guys. Finally Michael Foster answered the ad in the paper and showed up at our rehearsal room. I remember he had a really ugly green drum set but he could sing REALLY well and he had a GREAT groove. His first song to audition was “Say What You Will” by Fastway which has a swing feel and he just SLAMMED it! What really impressed me was his ability to sing and play drums at the same time. He was given a song list of the 35 songs we were playing at the time, and when he came back the next night he knew them all perfectly with harmony parts nailed! He obviously got the gig. That was in 1984.

Michael and I used to go out to the rock clubs when we weren’t playing gigs. One night we saw this band called Maxx Warrior. Their singer, CJ Snare, and a bass player, Perry Richardson, both blew us away. CJ and Perry sang so well together I just remember thinking, “Wow! If Mike and I could work with those two guys we’d be a really strong four piece band.”

Over time, Maxx Warrior broke-up. I sent CJ some songs that I had written and asked him to sing on our tape. He just tore it up. We did a show in Virginia with him as our singer a few weeks later and I’ll never forget him telling me that after performing live with us that he felt like this was the right band for him. I told him that I knew that he was the right singer for me and I thought we could make it in the music business together. I couldn’t believe what a great voice he had. I am still amazed to this day at his song writing ability and clever musicianship, and of course his pipes! CJ is also a great piano player.

After we had a tape with CJ‘s voice on it, we took it to Perry. He really liked it, but had promised the band that he was in at the time that he’d complete six months of gigs. We just said, “We’re coming to get you when that six months is up!” We sold our P.A. system, moved to Charlotte, North Carolina, and started recording demos in my bedroom. Our band house had a basement where we would mic the drums and guitar speakers, run the mic cables through the air conditioning ducts into my room, and record all day. We’d play hotel gigs at night to make money to pay the rent and bills.”