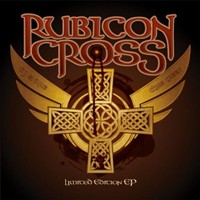 FireHouse vocalist CJ Snare has teamed up with Furyon guitarist Chris Green to form one of the best, and most talked about, modern/heavy metal/melodic rock bands called Rubicon Cross.

The duo have released a 4-song teaser EP that is certain to become the new ‘Soundtrack For Your Summer’. The self-titled EP is available as a download via iTunes and Amazon.com, as well as a limited edition physical CD (available to US customers only) from the band’s website at www.rubiconcross.net.

The Rubicon Cross EP features the songs “Movin’ On”, “Next Worst Enemy”, “R U Angry” and “Shine”.

Regarding ‘Full Circle’ CJ Snare said, “This CD is our answer to what fans from around the world have been asking us for many, many years — ‘Can we get all of our favorite FireHouse songs on one CD?’ To celebrate the 20 year anniversary of the release of the firstt FireHouse CD on September 11, 1990 we went into the studio to re-record both band and fan favorites. We are really proud of this CD and it was a lot of fun getting back into the studio to play these songs again. We hope that you will add it to your collection.”