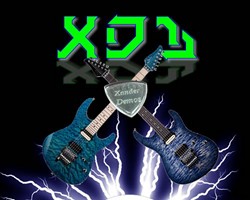 Xander Demos, the incredible rock and metal shred guitarist best known as both a solo instrumentalist and as a member of Sabbath Judas Sabbath, has announced February 29th as the official release date for his debut full-length release ‘Guitarcadia’.

The CD, which was mixed and mastered by another virtuoso in his own right, CJ Snare of FireHouse, features an eclectic list of Xander’s original instrumental compositions, as well as some vocal tracks and a couple of cover songs, done in Xander’s own unique style. The lead single, “Right Angles”, has been airing all over internet radio, beginning last July, and with the release of the full album a new single is being planned.

“There are some really strong songs on this album. That’s right… songs!” says Michael Stover of MTS Management. “Not only does Xander possess the intense, jaw-dropping techical skills, but his material is actually the stuff that hit records are made of. I put his stuff right up there with your Vais and your Malmsteens. We’re really excited to get this record out.”

Previews of the CD have been posted regularly on Xander’s social media pages, but the full mastered version of the album has never been completely available before. ‘Guitarcadia’ will be available at iTunes, Amazon, Rhapsody, and everywhere music is sold. To hear samples from ‘Guitarcadia’, or for more information, visit www.xanderdemos.com.

Xander Demos has appeared on Steve Vai’s GuitarTv.com, The Real Radio show, The Southern Star Network, GuitarWorld.com, Screamer Magazine, Guitarist Nation and countless other sites. He appears yearly at NAMM, and he has endorsements with Suhr and McNaught guitars, ISP Technology amps, and V-picks, among others. Xander will be opening for fellow guitarist, Buckethead in Pittsburgh on April 6, 2012.