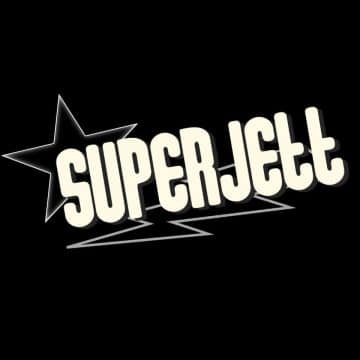 The group describes as follows on its Facebook page:

“We are SuperJett, and we play the greatest rock n roll tunes you’ve never heard.”

The Rim in Norton, West Virginia, USA will have SuperJett performing on July 27, 2019 as the following message from Brad Smith on his Facebook account yesterday indicates:

“Today became a complete Yin/Yang day for me. Both events will be up soon and I am so excited for both shows and am extremely humbled by the opportunities given to me!

First up, on July 20th, The Rim will host Knuckleduster in their last (hopefully, for now) show! These guys, Josh Ringer, Austin Kritzer, Chuck Orem, Jake and Chase have played the most shows ever for us and to say we’re going to miss them is a huge understatement!

Second, and coming just one week later on July 27th is the return of Tony Leone to The Rim as he brings his latest project SuperJett (featuring members of 21st Century Goliath, Dirtbag Love Affair, The Fill Ins and Milkweed) for a no holds barred night of rock n’ roll!”

Dirtbag Love Affair released three albums, Wakin’ Up In My Chucks (2009), Good Riddance (2012) and All Spit (2017) while 21st Century Goliath released two records, Radio Destroyer (2012) and Back With A Vengeance (2014). Leone handled the lead vocals on all of those albums. Radio Destroyer finished at #7 on the Sleaze Roxx’s Top Ten Albums of 2012.

21st Century Goliath‘s “Back With A Vengeance” video: